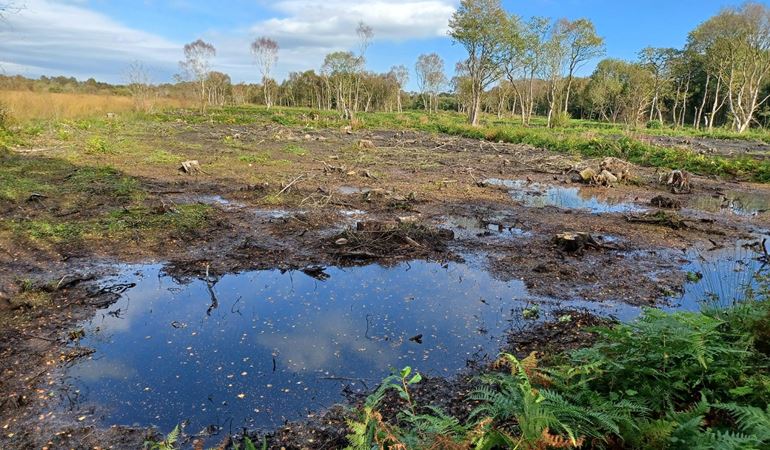 As part of our LIFE Welsh Raised Bogs Project we place significant importance on visiting and learning from other LIFE projects across the UK and Internationally.

In September the team visited the Marches Mosses Bog LIFE project - internationally important lowland raised peat bog spanning England and Wales. In this blog we look at what we discovered and what we can learn and apply to our own projects in Wales.

The Marches Mosses comprise of Fenn’s, Whixall and Bettisfield Mosses and Wem Moss National Nature Reserves (NNR) in North Wales and Shropshire. Together they form the third-largest lowland raised peatbog in the UK. The 2,500 peat bog straddles the Wales-England border with 75% of the NNR located in Wales.

What is the project doing?

Since 2016 Shropshire Wildlife Trust, Natural England and Natural Resources Wales have been working to restore 2,500 acres of the Marches Mosses and surrounding peat edge (‘lagg’) with the goal of making them healthy, functioning eco-systems once again.

From the outset, the project’s ambition was to remove invasive scrub and trees, retain more rainwater on the centre of the Mosses and recreate bog on marginal fields.

What challenges did the project face?

The Marches Mosses project faced very similar challenges to those faced by the LIFE Welsh Raised Bogs Project on its sites.

Historical commercial peat cutting on the Marches Mosses and the effects of drainage ditches lowering water levels has negatively impacted the bog habitat.

This has caused the site to dry allowing invasive scrub such as purple moors grass (or molinia) to establish and dominate the site.

What has the project achieved so far?

The Marches Mosses project staff have worked with the help of volunteers to remove invasive scrub. The Mosses has a major problem with purple moor grass, which smothers special bog species, preventing their growth.

As we know from our own project, trees and grasses are good in the right place, but not in the middle of a peat bog.

While trees capture lots of carbon, peat bog captures even more and left undisturbed, stores it over millennia. As the bog gets wetter and more acidic following restoration, the invasive scrub species will find it difficult to regrow.

The LIFE Welsh Raised Bogs Project is also fighting molinia and scrub on its sites. A wetland harvester machine has been bought by the project to cut Molinia grass, whilst contractor are also stem injecting and cutting scrub (small trees) on the sites.

The Marches Mosses project also sought to regain control of the water on the site. To achieve this the team has diverted large drains in ways that protect the surrounding area and blocked up a myriad of smaller ditches that criss-cross the site.

‘Cells’ have been created by using a technique called bunding (see below image). These are small mounds of peat that act like dams to capture and hold water on the bog.

The LIFE Welsh Raised Bogs Project is also using bunds to hold more water on the bog. At only 25cm in height, they follow the contours of the raised bog domes. By restoring the natural water levels more sphagnum moss will establish and thrive.

Wet and boggy conditions are ideal for sphagnum moss, the building blocks of any peatland site. As sphagnum slowly degrades over thousands of years it creates peat.

We are grateful to the Marches Mosses Bog LIFE project for inviting us to visit. The experience provided useful insight into how both projects are successfully using similar methods to restore these important and unique habitats.