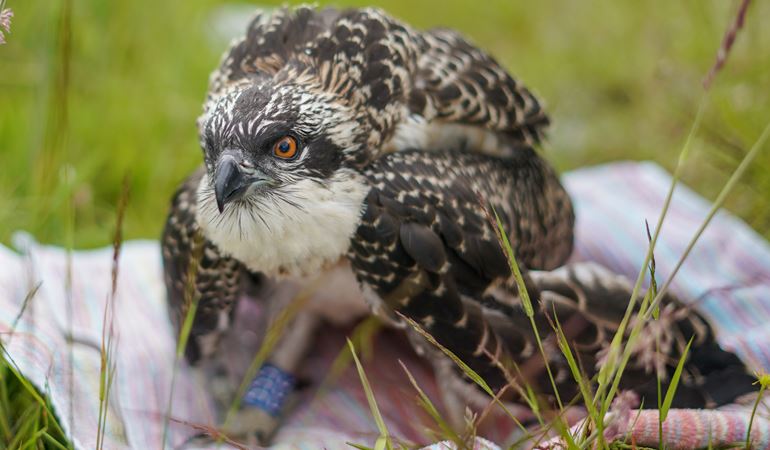 The Llyn Clywedog osprey nest was built by NRW staff on a platform high up in a sitka spruce tree in 2014 and has proven to be a productive incubator over the years, with 18 chicks fledging the nest and migrating since it was built in 2014.

The nest has a dedicated following who have been keeping tabs on the birds by use of a live stream webcam installed by NRW in 2020.

Being able to see little chicks hatching, growing and flourishing while we were all in the throws of the first Covid-19 lockdown was an escape to many people.

Regular viewers will know that chicks have rings placed on their legs. In this blog, John Williams - one of our mid Wales Technical Support Officers for Land Management – tells us all about ringing osprey chicks after he facilitated the ringing of the chicks that hatched i the 2022.

Ringing the chicks in July 2022

It was a bright July morning when I and a licenced bird ringer got to the nest. I needed to arrange for a licenced person to accompany me so that he could safely handle the chicks and make sure the chicks were ringed correctly and safely.

The nest is on top of a 20m tree by Llyn Clywedog, so we used a large cherry picker to lift us up to the nest.

For our safety as well as the chicks’, the plan was to bring the chicks down to ground level, ring and weigh them and then take them back up to the nest.

Three chicks have hatched from the Llyn Clywedog nest this year, which is great, as ospreys usually produce three eggs in a season.

It was a steady rise to the nest which has a fantastic view. Our presence there had made the adult ospreys temporarily leave the nest, but the resident female was circling above us, keeping a close eye on her chicks.

When we got up to the nest, the three chicks were lying down flat and were not moving. This is called thanatosis – or playing dead – which is a defence mechanism. Despite this, they never showed signs of being very distressed, such as panting.

The ringer gently lifted them one at a time and put them into a cloth bag. When one chick needed to go on another, he made sure there was a piece of cloth separating them so that the talons of one chick wouldn’t hurt its sibling beneath it.

We got them to the ground and put them on a towel each to keep them clean and safe. Once they were on the ground, the chicks were more relaxed and stood up, taking in their strange new surroundings. They had never left the nest before. 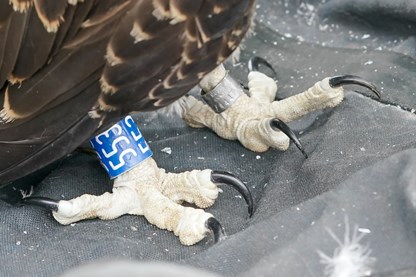 The ringer put a ring on each leg of each chick. The first ring is a blue ‘darvic’ ring that has a number clearly marked on it in white. This ring will be used to identify the chicks once they fledge the nest. The darvic ring is placed on the bird’s right leg in Wales and England.

The second ring is placed on the left leg and is made of metal and has a seven-digit code. This ring is used by the British Trust for Ornithology to monitor the population over time.

We then gently lifted them back into the bag, and safely got them back to the nest.

All in all, the chicks were away from the nest for no more than 20 minutes and are back in fine form, gobbling down the fish provided to them by their parents.

Why ringing is important

Ringing chicks is very important in osprey population conservation and monitoring. It lets us know where individual ospreys come from and how old they are.

For example, the resident female osprey on the Llyn Clywedog nest has a blue tag which has the code ‘5F’. When she first turned up on the nest two years ago, the ring allowed us to find out that she is a female osprey that hatched on a Rutland nest in the East Midlands in 2012.

We also know that she spends her winters in the Tanji Marsh in Gambia. We only know that because she – along with her ring – has been photographed there. Ospreys that spend the summer months in the UK are migratory birds who winter in Africa.

Ringing the chicks has meant that we know that at least four of the birds that fledged from the Clywedog nest have returned to mid and west Wales after returning from Africa. They have been spotted on the Llyn Clywedog nest live stream camera this year as well as at the Dyfi Osprey Project in the nearby Dyfi Estuary.

Why ring ospreys as chicks?

There is a sweet spot time frame for ringing osprey chicks. By the time they are around five weeks old, their legs and bodies are fully grown, so there is no risk that they might outgrow the rings, or that the rings would hurt them.

Not long after that however, they will fledge the nest and learn to fly – so we won’t be able to catch them then!

Don’t forget that you can follow the nest live, 24/7 by following the live stream during the summer months.

Watch Camera 1, focusing on the nest.

Watch Camera 2, facing the nest and a nearby perch