Grey seals: How to watch them, be near them, and autumnal storms 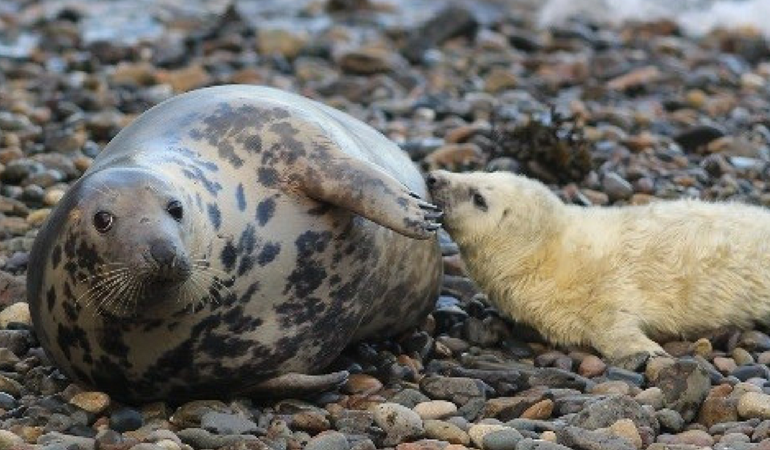 Wildlife on the Welsh coasts are varied and rich. It’s not often that we get the chance to enjoy watching wild mammals in their natural environments, which is part of what makes it so special.

Pupping season for grey seals is currently underway. But, if we are lucky enough to get the chance to see them, it’s very important to make sure we follow the guidelines and codes of conduct designed to give them the space and peace they need to grow.

Seal watching: a guide to observing seals and pups

“Seals are shy creatures and can be easily disturbed. If you come across a seal, be sure to keep as still, quiet and inconspicuous as possible.

Never approach seals close up – if they are disturbed, the mothers will keep away and pups will miss important feeding time. These pups are dependent on their mothers to feed them for the first few weeks of their lives. Sometimes, mothers can become aggressive when interrupted, or could abandon her pup altogether. Full details of how to avoid disturbing seals can be found in regional or national codes of conduct.

Grey seal pupping season extends from mid-August to December, with a peak in September and October across the Welsh coastline.”

What happens after pupping season?

Seals are most at home out at sea and usually come ashore for the pupping and breeding season in the autumn and to rest up on secluded rocky outcrops or on beaches.  During the pupping season the big autumn spring tides and autumnal storms which can wash the pups of the beaches or from inside caves.

Following the pupping season, many of the new young seals along with the adults haul out in large numbers on remote beaches from November to early March. During this winter haul-out the adult seals rest and moult to allow their double fur coat to be ready for long foraging explorations in the spring.

There is perhaps a surprising diversity of species in Welsh waters. Of 29 different cetacean (whale and dolphin) species documented in the UK, 18 have been recorded in Welsh waters since 1990, alongside two species of seal. Wales has protected sites for the three most common species, harbour porpoise, bottlenose dolphin, and grey seal. Other commonly occurring species include Risso’s dolphin, minke whale and short-beaked common dolphin. We do also occasionally see harbour seals in Wales, but these occur in low numbers and are not known to breed here. Other rare or occasional visitors include killer whales, long-finned pilot whales, and humpback whales.

The UK Cetacean Strandings Investigation Programme (CSIP) coordinate the investigation of all whales, dolphins, and porpoises (collectively known as cetaceans), marine turtles and basking sharks that strand around the UK coastline. CSIP don’t routinely carry out post-mortems on seals, but do record all reports of dead seals around the Welsh coastline.

As we enter the time of year where stormy weather can wash animals up on the coast, if you come across any dead Cetacean, Whale, Large bodied shark or seal contact the strandings line on 0800 652033 straight away. If you can, please take photos and record a precise location of the animal, which will enable CSIP to identify the animal, co-ordinate a response, and help with the wider investigation programme. More information is available on the project at www.ukstrandings.org.