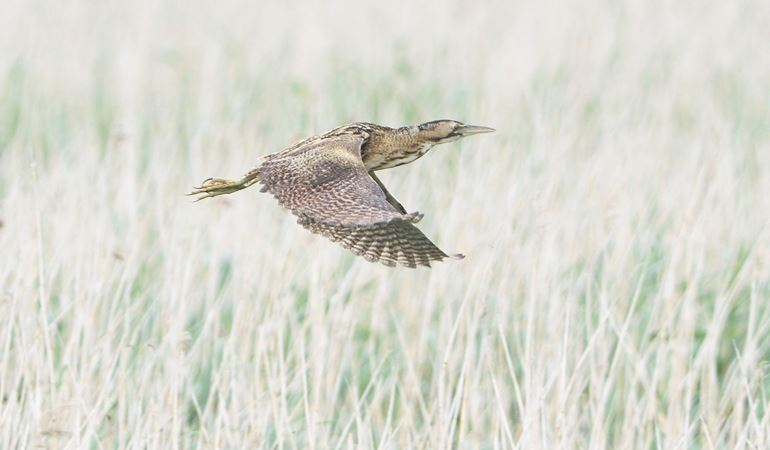 One of the UK’s most rare and threatened bird species has successfully bred on the Gwent Levels for the first time in over 200 years.

Bittern chicks have fledged from two separate nests at the Newport Wetlands nature reserve which is managed by Natural Resources Wales (NRW) in partnership with RSPB Cymru and Newport City Council.

The sighting was first recorded by NRW team member Kevin Dupé who has worked at the reserve for over 19 years, and later confirmed by local county bird recorder and ornithologist Darryl Spittle.

Bitterns are a type of heron which live exclusively in reedbeds. The species was once thought to be extinct in the UK following years of persecution and a dramatic loss of habitat, but populations have since returned to areas where high quality reedbed habitat still exists.

“To see bitterns nesting at Newport Wetlands is a truly wonderful sight, and a real achievement for those of us who have been involved in habitat conservation at the site for a long time.

“In the last few years bitterns have been nesting and breeding in areas of north Wales where there has been extensive reedbed restoration, and we had only hoped to see the same success here.

“Wetlands are an important habitat in need of our help. As well allowing species like the bittern to come back from the brink, they can also help us in the battle against climate change by storing harmful carbon and holding back flood water.”

“Newport Wetlands is an important home for wildlife and a valuable source of nature to the large urban population living in nearby towns and cities. We’re delighted that bitterns are nesting here, and they’re joining a suite of rare wildlife that thrives on the reserve.

“The last record of bitterns nesting in south Wales was over 200 years ago, so the fact that this iconic bird is nesting at Newport Wetlands goes to show how the creation and management of reedbeds at this site has paid off. We hope that this nesting will be a sign of what’s to come, and that more rare wildlife will settle at this site and across the Gwent Levels in the future.”

“It was great to hear that Bitterns had bred successfully at the Newport Wetlands, another notable achievement for the NRW management team and an exciting addition to Gwent's current breeding avifauna. Whilst Bitterns possibly nested on the Gwent Levels in the past, the relentless drainage of wetlands in the 18th century mean it may have been the best part of 250 years since Bittern last fledged youngsters in the county!"

Newport wetlands is a unique site made up of wet grasslands, reedbeds, saltmarsh and saline lagoons. An ongoing programme of conservation by NRW and RSPB Cymru helps to keep the habitat in good condition for the rare species which thrive in it.

In recent years the reserve has also benefited from the Living Levels Programme – a Heritage Lottery funded partnership seeking to reconnect people to the heritage and wildlife of the historic landscape of the Gwent Levels.

The car park at Newport Wetlands has now reopened to visitors following closure due to covid-19. NRW reminds visitors to take precautions and adhere to social distancing guidance at all times.