SoNaRR2020: Action for people and the planet

SoNaRR2020 is an assessment of the extent to which Wales is achieving the sustainable management of natural resources. The report concludes that Wales is not yet meeting the four long-term aims of SMNR. This is not surprising as sustainable development will not be achieved overnight, but Wales has put the laws and processes in place to achieve its well-being goals for a sustainable future.

Wales is not maintaining stocks of natural resources, as described in aim 1. Iconic species like curlews are predicted to become extinct in Wales within a couple of decades.

The state of natural resources has an impact on the resilience of our ecosystems. Aim 2 finds resilience to be declining in line with global trends. The UN predict that globally, one million of the eight million species on the planet, will be extinct within 20 years.

Without stable levels of natural resources and resilient ecosystems, aim 3 will continue to show that people across Wales are not free from environmental hazards and do not all have healthy places to live in.

A regenerative economy, in aim 4, cannot be achieved while economic activity takes place at the expense of the environment.

Aim 1 - Stocks of natural resources are safeguarded and enhanced
Aim 2 - Ecosystems are resilient to expected and unforeseen change
Aim 3 - Wales has healthy places for people, protected from environmental risks
Aim 4 - A regenerative economy with sustainable levels of production and consumption

The IPBES global assessment of 2019 concludes that with the current model of economic development:

We are eroding the very foundations of our economies, livelihoods, food security, health and quality of life worldwide.

In place of the standard graph of gross domestic product (GDP), showing a seemingly unlimited potential to increase the production of goods and services, Oxfam have developed the Doughnut economics model.

The outside edge of the Doughnut model shows the physical limits to the functioning of global systems. On our planet there are definite physical limits, as the economist, Kenneth Boulding said:

"anyone who believes exponential growth can go on forever in a finite world is either a madman or an economist."

Oxfam have added data from the Welsh Government Well-being of Wales reports to update their Welsh Doughnut report. The Doughnut shows a failure to stay within the limits of what is sustainable, shown by the green doughnut (Figure 1). Wales is not keeping within our global share of the environment, on the outside of the doughnut, nor meeting its socio-economic goals, on the inside edge: 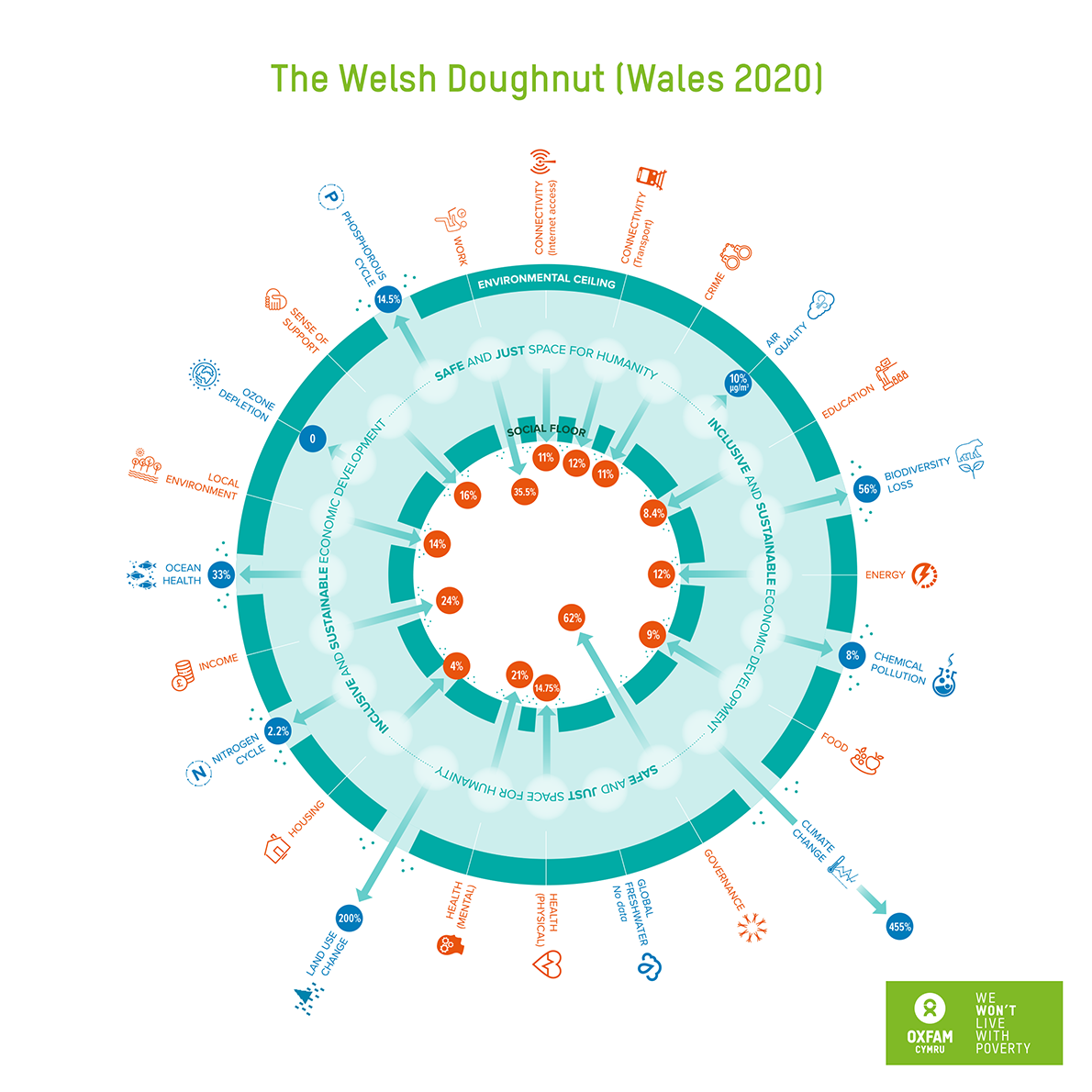 The options for securing abundance within the planet’s physical capacity is the space which a regenerative and circular economy would explore as detailed in aim 4.

The need for an integrated approach

Lifestyles and the way goods are produced and consumed need to change to achieve SMNR. Wales's overall consumption of resources needs to drop if we are to achieve ‘one planet living’. As the IPBES says, what is needed is:

Wales has the framework in place, in the form of the Well-being of Future Generations and Environment Acts, to deliver such change and transition to a sustainable future.

To explore what ‘one planet living’ or ‘life inside the Doughnut’ would look like, the Welsh Government has joined the Wellbeing Economy Alliance, a network working towards a well-being economy, delivering human and ecological well-being. This integrated approach, recognising that the well-being of both people and planet are intertwined has to be central to solving the nature and climate emergencies.

Beyond these examples of changes which could be made to three core socio-economic systems, there is a more general need to reduce levels of production and consumption and to do so in a way which does not reduce levels of well-being.

To use the Doughnut economics model, reducing the overshoot beyond the outside edge, cannot come at the expense of contracting the inner edge of the doughnut and squeezing social well-being. 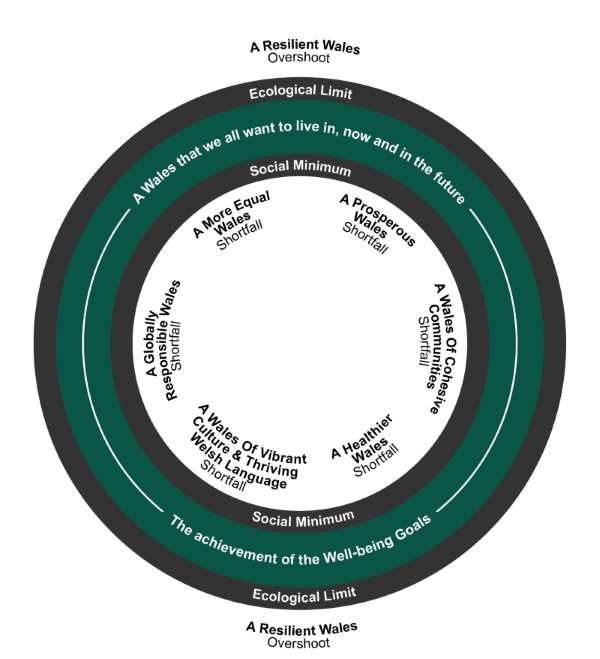 Figure 2: Figure using the Doughnut model showing 6 of Wales’s well-being goals within the social minimum and the resilient wales goal as the overshoot around the outside

Setting out how Wales can address the root causes of environmental degradation, still leaves a need to take action on the ground to help with the restoration and enhancement of our broad ecosystems.

Addressing those wider systems challenges, the pressures that the natural environment face around fragmentation, over-exploitation and pollution, as well as climate adaptation, can now be seen as critical features of redesigning how we organise our society and economy.

In the past we have built a regulatory framework in response to the environmental trade-offs caused by growth and unsustainable resource use.

In the future, we can design in regulatory mechanisms that ensure space for biodiversity is built into a regenerative economy. To enable this, we may still require a range of targets or measures to help communicate the investment and resources needed.

One such example is the UN’s suggestion that countries should set aside 30% of their area for nature by 2030. The UK is signed up to protecting 30% of its land for nature by 2030, meaning an extra 400,000 hectares, an area quarter the size of Wales.

Measures such as this should be designed into future systems approaches, and not seen as stand-alone objectives. This is an opportunity to use the SMNR principles to pursue the well-being goals.

Rather than being labelled 'protected areas', protected from humans, perhaps these expanded areas could be re-framed as being ‘promoted areas’, places where biodiversity is promoted and human activity regulated accordingly. (Buscher B and Fletcher R, 2020)

This would make it clear that nature cannot be protected by being separated from society, but that humans need to engage positively with their environment.

As a former head of the US Nature Conservancy said: it would:

Meeting the well-being goals and achieving sustainable development, and the sustainable management of natural resources, will depend on Wales achieving healthy, thriving environmental, economic and social systems.

Viewing society and the economy as if they are separate from the environment, has not worked. It has led to people in Wales pursuing lifestyles which cannot be met from Wales’s fair share of the Earth’s resources.

On the other hand, managing the environment as if it is separate from society has meant that humanity has restricted itself to dealing with the immediate environmental impacts of Welsh lifestyles. More joined up actions have not been taken in the social sphere to address the problems at source, with the problems being viewed as purely environmental.

Bringing it all together 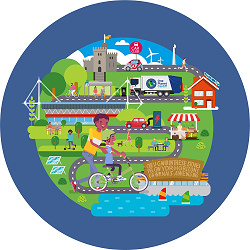 As an example of an integrated approach to these issues, Cardiff Council are developing the One Planet Cardiff strategy to make Cardiff more sustainable and become a carbon neutral city by 2030. The strategy looks at 7 different areas of focus:

NRW has produced SoNaRR2020 as an evidence base for organisations across Wales to make use of in their decision making process.

For example, we expect SoNaRR2020 to be of use to Welsh Government in informing the Natural Resources Policy and to local authorities in writing their local development plans. We hope that it will be of use to other organisations across Wales working to achieve the well-being goals.

NRW itself will use the evidence in SoNaRR2020 to develop a shared vision for 2050 responding to the increasing environmental pressures detailed in our report.

We will stimulate a national conversation to help develop a long-term agenda for the management of natural resources. The result will be a collective vision, which everyone in Wales can help to achieve.

NRW is in a unique position to lead this national conversation, to collaborate with others and to help realise a shared vision. The vision for 2050 will focus on how current behaviours and practices affecting natural resources need to change to become sustainable.

The conversation around the vision, will be just as important as the final statement itself. NRW will work with a range of organisations from different sectors and places across Wales. We want to enable partners to develop their own long-term plans to deliver a joint vision for Wales.

Collectively, these individual plans will help Wales deliver the shared vision for 2050. NRW will play a lead role in co-ordinating, developing and realising this vision.

Other places in SoNaRR2020: Bridges to the future Changing the way we all live