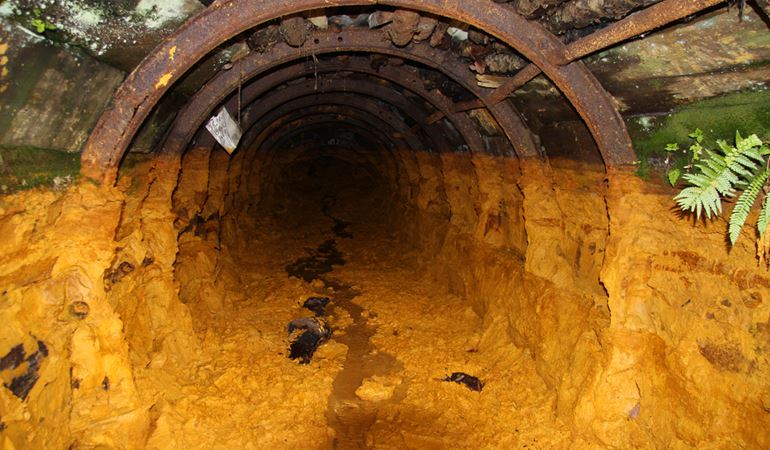 Wales has a long history of mining metal ores, dating back to the Bronze Age, with the industry reaching a peak in the latter half of the 19th century.

By the 1920s most mining had ceased, but discharges from underground workings and leaching of metals from spoil heaps still present significant sources of water pollution today.

There are 1,300 abandoned metal mines in Wales that have been estimated to impact over 200km of river reaches.

Effect on the ecology of rivers

Elevated levels of metals, primarily zinc, lead and cadmium, can have a detrimental impact on the ecology of our river systems, reducing fish populations and the diversity of invertebrate fauna.

Abandoned mines are the principle cause of waterbodies in Wales failing to achieve European Water Framework Directive (WFD) standards.

The Metal Mine Strategy for Wales* (Environment Agency Wales 2002) identified the 50 abandoned metal mines causing the  greatest impact on rivers in Wales by the potential ease with which remediation works could be completed.

We have since carried out extensive investigations and feasibility studies to help us further prioritise and deal with the most polluting mines, including an assessment of their impact in over 90 waterbodies across Wales for the WFD.

To date we have completed one major remediation scheme at Frongoch mine, and smaller scale remedial works and pilot treatment trials at Parys Mountain and Cwm Rheidol mines.

* Full reports in document downloads below

Looking to the future

We have an ongoing programme of assessment across Wales, and continue to identify innovative solutions and seek additional resources to deliver these at priority sites.

We are working closely with other stakeholders, including Welsh Government, the Coal Authority, universities, local authorities, landowners and mining enthusiasts.