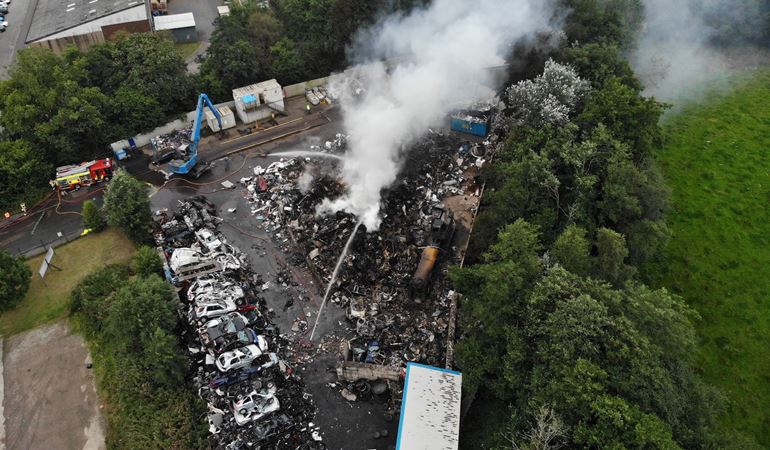 Natural Resources Wales (NRW) are working with partners and emergency services following a large fire that broke out on Wednesday afternoon (1 September), at a recycling plant on Penallta industrial estate in Caerphilly.

Approximately 150 tonnes of recycling material including, plastic, foam, electrical items, lead batteries, and gas cylinders is estimated to have caught fire alongside machinery.

The site is a regulated facility and has a permit from NRW.

Officers from NRW have been working alongside Spill Response Wales and the South Wales Fire and Rescue Service to pump fire water run off from the site,  to reduce the risk of flooding to nearby properties.

A number of measures have also been put in place to help minimise the impact of pollution to the local environment.

This includes placing bunding and matting in the Nant Cylla a tributary of the river  Rhymney, and booms and pads in local water courses to absorb any oil and petrol run off from the site.

Dams have also been created in nearby brooks  and four-inch pipes inserted to let clear water through.

A large amount of oil and petrol has entered a stream near the industrial site and a number of dead fish have been confirmed.

NRW officers will continue to monitor the area over the next few days and are advising people to avoid contact with the water in the Nant Cylla and nearby water courses whilst recovery and clean up operations take place.

Our officers have been on site at the industrial estate to support SWFRS and work with our partners to reduce the risk to the environment and local community.

Multiple crews from various Stations in the South Wales area attended the scene and upon arrival were faced with a well-developed fire. Crews worked tirelessly to tackle the fire and utilised their training and a range of resources to prevent the fire from spreading and affecting other areas.

As of this morning (Friday, September 3rd 2021) our firefighters are no longer in attendance at the scene of the incident and thanks to a combined multi-agency operation, we were able to contain and extinguish the fire.

The clean-up process is now underway and we would like to remind local residents that the recycling plant remains closed at this time and to follow any guidance from NRW and Public Health Wales regarding the surrounding area.

Anyone who may have any environmental concerns can get in touch with Natural Resources Wales by calling 0300 065 3000, which is open 24 hours day.