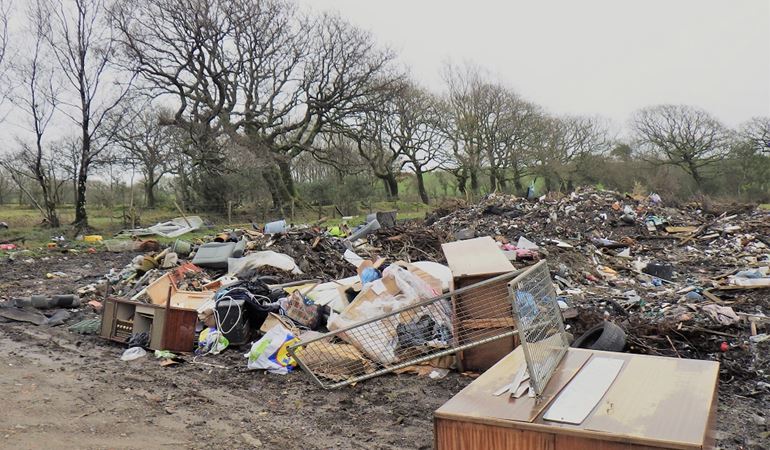 A former police officer has been ordered to pay £3,740 after admitting three charges relating to illegally depositing waste on her land at Swiss Valley, Felinfoel, Llanelli following an investigation by Natural Resources Wales (NRW).

On 22 October, 2019, the Mid and West Wales Fire and Rescue Service (MWFRS) attended a large fire at Cammarch Stud, a property owned by Samantha Prynne.

By the time the MWFRS crew arrived the fire was well alight with exploding canisters and burning white goods. The firefighters were unable to get closer than 50m to the blaze and a decision was taken to let the fire burn out to ensure the safety of the crew.

MWFRS returned to the site at midnight to find the fire burning with the same ferocity and then again at 7am the next day when the fire had burnt out with only a few pockets of waste still alight.

NRW officers met with MWFRS at the site on 24 October.

Officers calculated that the waste would have covered approximately 650m2 before the fire.

On 15 November, NRW officers again visited the site where they found the burnt and partially burnt waste remained and a large amount of new waste had been deposited alongside the burnt waste.

Large amounts of unopened packaging holding medication in pill form were in the black bags and were prescribed to Ms Prynne. There were also other items addressed to Ms Prynne.

The site did not have any environmental permits or exemptions which would have allowed the deposit, incinerating or transporting of waste on the land.

Although there was no direct evidence of who brought the waste to the site or who set it alight, NRW officers found the site to be unsecured on each of their visit.

By not securing the site, Ms Prynne was knowingly permitting the deposit of waste.

The fire on 22 October was set deliberately and was foreseeable due to a number of earlier fires on the site, again by not securing the site Ms Prynne knowingly permitted the burning of waste.

“Waste crime is not only dangerous to the environment, it also poses a risk to local communities, as well as undermining legitimate waste businesses.”

“That’s why activities such as these need environmental permits which set out the rules that have to be followed so they do not pose a risk to the environment and local people.

“When those rules are ignored, whether for commercial gain or due to poor management, we will always take the appropriate steps to protect our natural resources and the communities which we serve.

“We would also like to thank the Mid and West Wales Fire and Rescue Service and Dyfed Powys Police for their assistance with this case.”