To mark the anniversary of the freight train derailment, fire and diesel spill in Llangennech, Carmarthenshire, let’s look back at how partners pulled together and averted an environmental disaster.

The fire took 33 hours to extinguish with emergency services working through the night. The recovery operation, coordinated by NRW with a wide range of partner organisations and specialist contractors, has been amongst the most challenging ever undertaken since the Sea Empress disaster 25 years ago.

Ground teams from Network Rail, Natural Resources Wales, Adler and Allan, Jacobs and other partner agencies have put in a total 37,500 hours of work to protect the local environment, remove the huge wagons from the site and repair a large stretch of damaged railway.

Closure of the railway line and the remediation works impacted on local businesses, industry, tourism, residents and of course the environment.

Now the railway line is reinstated and reopened, but the aftereffects of the diesel spill continue to be monitored, and will be for years to come.

At 11.15pm on 26 August 2020, a freight train travelling from Milford Haven to Theale derailed on the Swansea District line near Llangennech in Carmarthenshire.

The freight train was carrying 25 tank wagons, each containing up to 100,000 litres of diesel.

Ten of the wagons derailed spilling 330,000 litres of diesel, half of which was consumed in a major fire.

Fire and smoke could be seen for miles around. There were two train crew on board and thankfully neither were injured.

An 800-metre exclusion zone was put in place and 300 residents were evacuated late at night by emergency services.

It took 33 hours for the fire and rescue service to extinguish the fire.

The emergency response and subsequent recovery operation were all carried out in the midst of the global Covid-19 pandemic and all the restrictions that imposed on the operation. The crash happened on a site of international importance, within a Site of Special Scientific Interest, Bury Inlet Special Area of Conservation, a Ramser conservation site and on the edge of The Coal Authority’s Morlais Minewater Treatment Works. The site encompasses 4,000 hectares of regulated cockle fishery supporting 36 licenced gatherers and a number of mussel gatherers and other fisheries within the area.

It’s a fishery that has been recovering in recent years. It has had issues in the past with other pollution incidents, a parasite infestation and was on track for a sustainable future.

This is a completely passive scheme, relying on artesian mine water outflow from an old airshaft. Based on former Morlais Colliery site, but connected to large network of abandoned, flooded mine workings stretching inland for kilometres, it is one of the largest mine water treatment schemes in Wales.

Before this treatment scheme became operational in 2002, the mine water was impacting on Afon Morlais and Loughor Estuary with large, visible (orange) ochre plume.

It now discharges in accordance with NRW consent and no visible impacts.

The mine water treatment system continued to operate effectively throughout, protecting the Afon Morlais against mine water pollution despite record flows in February.

Trees planted to replace those lost in the fire are doing well and the site infrastructure has been repaired and upgraded to ‘better than before’.

Some works on site continue. Oil receptors are still in place to protect discharges to the Afon Morlais and weekly monitoring of the residual oil contamination left in the ground is set to continue for the foreseeable future.

Once the fire was extinguished and the Mid and West Wales Fire and Rescue Service allowed access to the site, every effort was made by the agencies involved to prevent any further pollution, with emphasis on recovery and containment of diesel as close to the scene as possible.

About 400,000 litres of diesel were removed from the wagons and transported to Puma Energy. Then the derailed wagons were lifted and removed by crane. Where required, wagon parts were transported to Farnborough, for investigation by the Rail Accident Investigation Branch By 8 September all wagons had been removed from the site. They were checked with a CCTV camera before being moved to make sure there was no residual fuel inside. All were completely empty so there was no risk of further spillage in transit by road back to their owners.

Trenches were dug either side of the crash site to help contain the spillage and minimise contamination of the estuary.

They installed temporary dams, a 150m high pressure air bubble barrier booms and absorbent matting, as well as skimming operations to contain the diesel as much as possible.

There was a huge amount of information and data coming in and being assessed on an hour by hour and daily basis.

The Wales Environment Group was convened at the time of the incident and worked to actively monitor and model the wider impact on the environment and public health. This information was used to guide the actions of organisations in minimising the off-site impacts on people and nature. Cefas provided daily modelling reports measuring plume based on wind and tide and working out where they thought the most likely areas were for the diesel to go ashore. This work told us that more than 70% of the diesel spilled had either evaporated or biodegraded.

The shellfisheries were closed for seven weeks as a precaution following advice from the Food Standards Agency.

Monitoring of the area included: Remediation work to remove and replace 12,000 cubic metres of diesel contaminated soil was carried out by specialist environmental contractors Adler and Allan and Jacobs.

The remediation plan split the contaminated site into cells. Each cell was carefully excavated, removing up to 30 cubic metres of affected soil at a time. It was removed from the site by lorry and safely treated at a licenced waste management facility near Merthyr Tydfil.

The excavated areas were filled with clean quarried materials sourced from quarries in Carmarthenshire and Pembrokeshire and specifically selected to meet the chemical and physical properties required for the site and surrounding SSSI and SAC.

Close working with the Coal Authority was crucial to establish the safest way possible to remove pollution from their land without compromising the mine water treatment lagoons, or risk any mine water escaping from the former Morlais Colliery. This work included the removal of the top layer of ground where contaminated fire water was pumped during the incident in an area of woodland to the north east of the incident site, as well as deeper excavation work at the incident site itself.The Coal Authority’s Morlais Mine Water Treatment Scheme continued to operate as normal throughout.

Contractors worked around the clock to complete the complex operation as safely and as swiftly as possible. They had to overcome many challenges, including flooding of the site during severe weather. Containment of the diesel continued, as well as ongoing monitoring of the surrounding environment and fisheries.

The whole recovery operation was designed to minimise the impacts on local wildlife, apart from precautionary shellfish closures there were no significant impacts on fish or wildfowl. Mid way through the recovery operation a seal pup found his way into the southern ditch of the crash site, out of home territory, was repatriated by the RSPCA and went for safe rehoming. During a boat survey Adler and Allan also rescued a squirrel mid way across the estuary! The southern end of the Heart of Wales line, which runs from Shrewsbury to Swansea, via Llanelli was closed for six months. In the final few weeks of the recovery operation, Network Rail worked to fit around 530 metres of brand-new track before reinstalling the signalling that was damaged in the fire. Freight services started back on the railway line through Llangennech late on Friday 5 March, with passenger services starting up again on Monday 8 March. 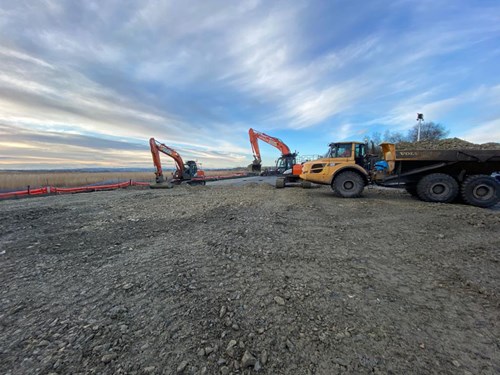 There have been far-reaching impacts on the environment – on land and in the sea, the community of Llangennech, local businesses, particularly the shellfisheries, tourism and industry.

Most of these impacts have now been overcome and activities restored, although work and support for some of these groups is on-going. The Bury Inlet cockle beds are economically and culturally one of the UK’s most productive.

The beds were closed as a safety precaution for seven weeks until mid-October.

Extensive sampling and monitoring took place and initial rounds of analysis of cockles and mussels in the area for residual oil contamination indicated they were within statutory limits, set to protect the health of consumers and the quality of the product.

As a precaution, a further rounds of samples were analysed in the weeks following the incident. Those results also came back within statutory limits and the shellfisheries were allowed to re-open subject to ongoing monitoring.

A programme of surveillance and monitoring of shellfish continued over the winter period to ensure the ongoing safety and quality of shellfish harvested from the area.

An interest free scheme was developed by Welsh Government, based on technical advice from NRW of likely losses to individual licensees and administered by the Local Authorities, Carmarthenshire County Council and Swansea Council to address the hardships of the cocklers who were unable to work the cockle beds for those seven weeks of the closure.

As principally an environmental incident, NRW led and chaired the recovery through all the stages to the reopening of the railway in March 2021.

A wide range of partners showed brilliant teamwork in working together to overcome many challenges and reduce the impacts through a Recovery Coordination and Tactical Group operating within the framework of the Dyfed Powys Local Resilience Forum. They worked together to reduce any potential for impact of the incident on the local community, the environment and the economy.

A Stakeholder Recovery Group was set up to keep people up to date with information and offer support to those affected to overcome the impact of this incident. This group was chaired by Nia Griffith MP. Monitoring of the site is continuing.

There are diesel interceptors still in place to protect discharges to the Afon Morlais and weekly monitoring of the residual oil contamination left in the ground is set to continue for the foreseeable future.

Shellfish monitoring will also continue for at least a further two years.

This work will be kept under constant review with relevant partners.

The Rail Accident Investigation Branch (RAIB) released is investigating the cause of the derailment and subsequent fire and diesel spill.

They published preliminary findings and urgent advice around the maintenance and inspection of wagons in November 2020.

The full findings of the investigation are due to be published soon.

NRW’s investigation into the cause of the environmental pollution is on-going.