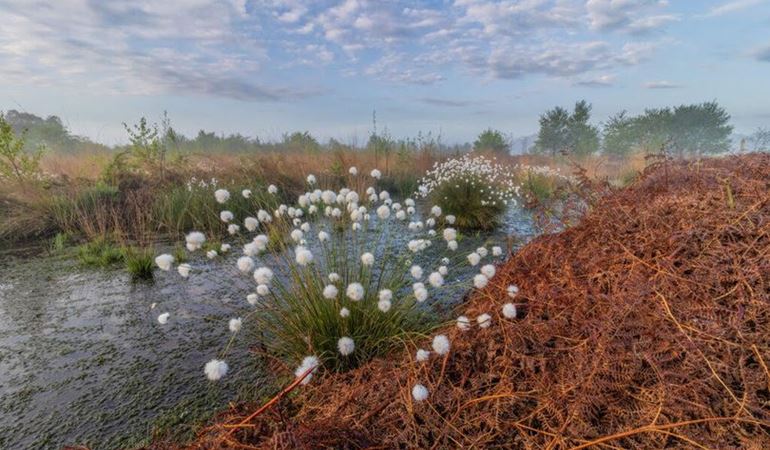 The Marches Mosses, the UK’s third largest lowland raised peat bog, was once known as a source of peat cut for fuel and horticulture. Now it is a leading example of how peat bogs can fight against climate change if restored. In 1990 ownership of the land was acquired by Natural England, Natural Resources Wales and Shropshire Wildlife Trust who began the process of restoring it before being joined by the European BogLIFE Project in 2016.

The 2,500-acre peat bog, which crosses the Wales-England border between Wrexham and Shropshire, has been cleared of trees and scrub, ditches have been dammed and bunds created to restore bog water tables to the peat surface. The 30th anniversary will also see the NNR status being spread to incorporate a further 237 acres of peatland which have been added to the restoration work.

“Thirty years of action to revive one our largest peat bogs is paying dividends in helping to tackle the climate crisis and, at the same time, has boosted the survival of its rare ecology.

“Places like the Marches Mosses are an example of what can be done to tackle the greatest environmental threat we face by simply allowing nature to recover and aiding that recovery with modern restoration techniques and protection through our designations as a National Nature Reserve and Site of Special Scientific Interest.”

Although the Marches Mosses comprise Cadney Moss and two NNRs (Fenn’s, Whixall and Bettisfield Mosses, and Wem Moss), they are actually a single large raised bog - an acidic, wet habitat perfect for the Sphagnum moss which slowly decays and stores carbon as peat. It is only when this peat is cut, dug up and dried out – now mostly for horticulture use - that the carbon is released. That is why gardeners are encouraged to do their part in the fight against climate change by using peat-free compost.

“Restoring and protecting peatlands is the only way we can safeguard their rich biodiversity and ensure they continue to deliver the full range of ecosystem services associated with these habitats, such as carbon storage, natural flood management and a range of other services.

“This collaborative cross-border project, as well as other projects in Wales and beyond, will contribute in a very significant way to addressing both the nature and climate emergencies.”

“Shropshire has its part to play in reducing CO2 emissions and efforts to restore and expand sites like FWB Mosses will be a key factor in combating the climate crisis. But the Mosses are also home for rare insects and birds, which depend on the acidic nature of the peatland. Declining wildlife species have made a return to the area as the restoration progresses.

“It is very encouraging to see what three decades of partnership work has created – imagine what can be achieved in another 30 years’ time!”