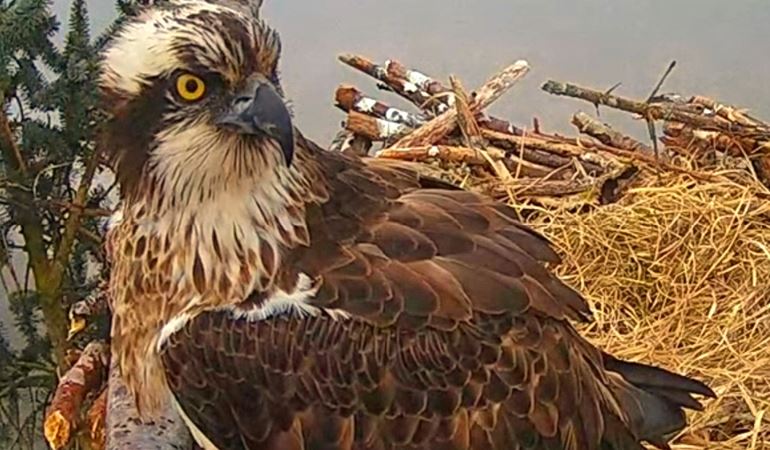 Viewers of the live stream from the nest of the resident Llyn Clywedog female osprey - known as 5F - are set to have an enhanced viewing experience this year as Natural Resources Wales (NRW) confirmed that the bird has returned to her nest for the spring and summer seasons.

Taking on board the feedback from followers NRW officers have made significant improvements to the live stream camera set-up which has captivated viewers for the last two years.

One camera will focus solely on the nest while a newly installed second camera will have a wider angle, enabling it to share footage of two perches situated alongside the nest – a viewpoint followers have been eager to experience for some time.

The cameras will run on separate live streams online, meaning viewers can watch both camera feeds at the same time.

For the past two seasons, the live stream ran from 7am until 7pm. This season, it is hoped the stream will be run 24 hours a day due to the installation of solar panels to power the equipment. NRW officers also hope to be able to use infra-red technology to allow viewing during the night.

The live streams are available for free on YouTube by searching for 'Llyn Clywedog Ospreys', or by using the following link: https://bit.ly/GweilchLlynClywedogOspreys.

John Williams, Technical Support Land Management for NRW said: "Spring has certainly sprung when an osprey returns to Llyn Clywedog. With our enhanced viewing capabilities, we hope to be able to give people an even closer insight to these special birds.

"While we hope for another successful season, we know only too well that nature is unpredictable and anything could happen. The only way to find out is to keep your eye on the live streams.

"Osprey numbers are improving after being persecuted for decades in the UK. Projects like this help to give them a stronger foothold and to educate people about these wonderful birds."

The nest was built by NRW staff on a platform high up in a sitka spruce tree in 2014 and has proven to be a productive incubator over the years, with 18 chicks fledging the nest and migrating since it was built in 2014.

Ospreys are migratory birds that winter in Africa. 5F - Llyn Clywedog’s resident female is known to spend the winter in The Tanji Marsh in Gambia, West Africa.

The hope is that the other resident osprey will return to the nest for the season,and that they again reproduce. Ospreys can rear up to three chicks in a season.

Llyn Clywedog is located at the NRW run Hafren Forest.