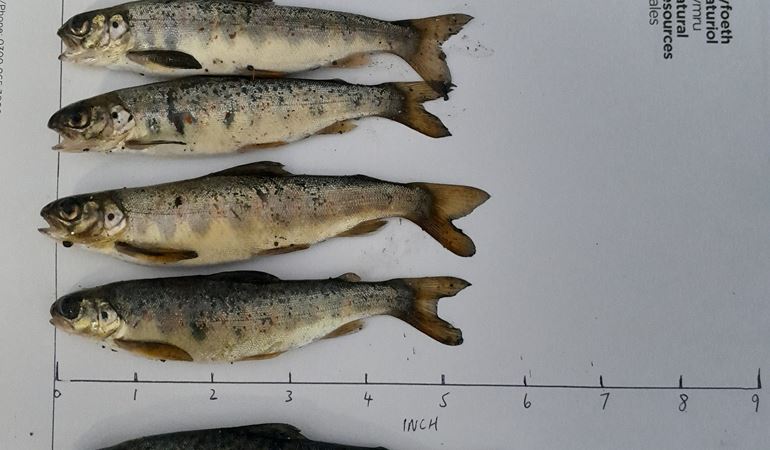 A Lampeter man has been ordered to pay £1886 after pleading guilty to killing six juvenile salmon on the Afon Teifi.

Catalin Neagu was spotted fishing in Lampeter by a Natural Resources Wales (NRW) Enforcement Officer on 6 July 2022. The officer saw Mr Neagu catch a small fish and put it in a plastic bag. After initially denying that he had caught any fish, he eventually showed the bag to the NRW officer which contained six juvenile salmon – known as salmon parr.

Since 2020, both rod fishermen and netsmen have been legally required to return any salmon caught unharmed to the river so that they may have the best chance of survival to spawn and reproduce.

Salmon stocks are in decline internationally and in Wales. Salmon stocks in the Afon Teifi are considered to be vulnerable, currently unsustainable and below safe biological limits. As a result, the river has been assessed to be in the highest risk category for the last three years.

“With salmon populations in decline nationally and in the Afon Teifi, we cannot afford to lose six young salmon. The byelaws are clear that any salmon caught in Welsh rivers must immediately be returned alive to the river.

“By killing juvenile salmon, Mr Neagu was removing future spawning fish from a river where the population is already ‘at risk’. Every little helps when stocks are at such low levels. Even relatively small numbers of fish are crucial for stocks to recover in as short a time as possible. These numbers therefore are inherently important."

“We will not hesitate to prosecute people who flout byelaws designed to protect Wales’ at-risk salmon and sea trout populations.”

Mr Neagu pleaded guilty to three charges at Aberystwyth Magistrates Court on 23 January 2023. He was fined £330 on each charge and was ordered to pay NRW’s costs of £500 and a victim surcharge of £396.