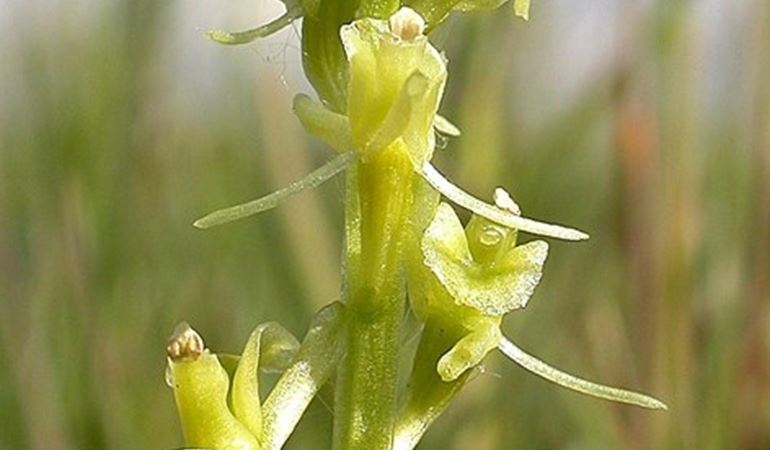 A rare orchid, dubbed the ‘crown jewel of sand dunes’ has been found at Laugharne-Pendine Burrows for the first time in nearly 20 years.

The rediscovery  of the rare Fen Orchid (Liparis loeselii) follows years of carefully planned conservation management by the Natural Resources Wales-led Sands of LIFE (SoLIFE) project and its partners.

The Fen Orchid was recorded by the Botanical Society of Great Britain and Ireland (BSBI) earlier this month, the first time it has been seen on the site since 2003.

An 11-year-old member of the BSBI, Tristan Moss, found the Fen Orchid, which was in flower and seed, while he was taking part in the annual Carmarthenshire recording week. In addition, another five plants were found by the16-strong BSBI party, one in flower and seed and the other four, non-flowering.

“Sands of LIFE, which will restore more than  2,400 hectares of sand dunes across four Special Areas of Conservation on 10 separate Welsh sites, has worked closely with site managers, QinetiQ; the Defence Infrastructure Organisation (DIO) ecologists; and NRW’s Senior Environment Officer for Carmarthenshire Ruth Harding, to target key areas for restoration at Laugharne-Pendine Burrows.”

“The recovery of this iconic species is the culmination of many years of work delivered by DIO and QinetiQ in partnerships with tenants, Natural Resources Wales and the Sands of LIFE project.

“It’s a genuine success story and a great example of the long-term commitment needed to support nature recovery at this and other important wildlife sites.”

The work of the  Sands of LIFE project has already produced some great results, as Laura explained:

“We are so pleased with the results from the scrub clearance programme that has been completed at Pendine.

“Scrub and rank vegetation will outcompete specialised, low-growing dune plants. but thanks  to this completed work a range of plant species such as the Fen Orchid can thrive.

“We would also like to thank all our partners including our contractors AJ Butler Contracting, who work meticulously showing great care for sensitive environments, and BSBI, for undertaking essential monitoring surveys and making this fantastic find.”