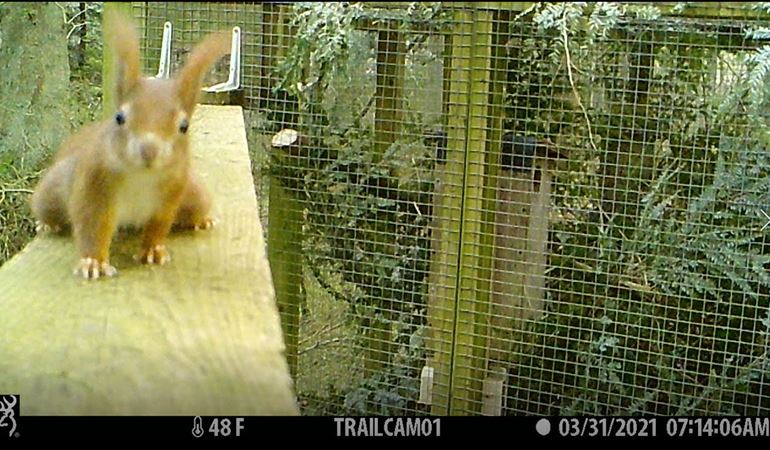 “We are committed to this programme that helps to increase the population of the red squirrels here in Wales.

“Red Squirrel numbers in the forest remain low but due to the enthusiasm and hard work from within the partnership, we should start to see the population increase. We’re grateful to bodies such as the Clocaenog Red Squirrels Trust who have been the driving force behind the reinforcement programme here in north east Wales.”

The two females were recently collected from Welsh Mountain Zoo and were put into a pre-release enclosure for three weeks to allow them to acclimatise themselves to their new surroundings.

During this time, they were monitored daily by volunteers from CRST who use trail cameras as well as Radio Frequency Identification (RFID) feeders, which are triggered by the squirrels’ microchip, the same microchip used for cats and dogs.

Following the acclimatisation period, the two females were released into the forest and have been closely monitored since. For a while they returned regularly to the enclosure for food supplies but more recently, they have been spotted using feeders further out which indicates their dispersal into the wider forest.

“This latest boost to the population has been a success and we’re grateful for all the help and support that NRW and Welsh Mountain Zoo have provided throughout.

“The two red squirrels are doing well here in Clocaenog Forest and we look forward to capturing more incredible images of these amazing animals thriving in their natural habitat.”