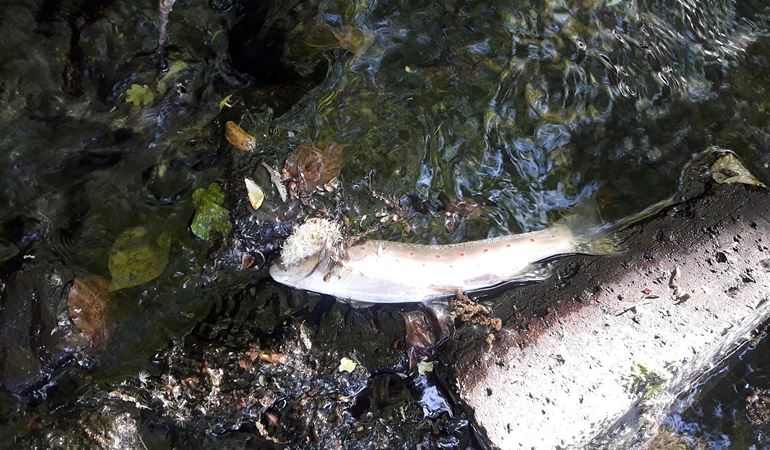 Officers from Natural Resources Wales (NRW) are now compiling evidence after a pollution incident in South East Wales affected Nant Cylla, a tributary of the River Rhymney over the bank holiday weekend.

Staff were on site near Penpedairheol, Caerphilly, within an hour of receiving a report of what was initially believed to be around 100 dead fish.

Although there were no visible signs of pollution, officers launched an investigation to try and find a source and establish the cause of death, including taking water samples and dead fish to laboratory.

The investigation continued throughout Sunday (26 May) and Monday (27 May)and officers confirmed the number of young and adult trout killed was close to 500, along a little under a kilometre stretch of the river.

The samples will now be analysed, and will inform NRW’s next course of action.

Protecting Wales fantastic rivers is incredibly important for us. As soon as we had reports on this incident our officers were on site to investigate.

Unfortunately, final numbers of fish killed by this pollution is much higher than we initially thought and has had a devastating effect on local fish stocks.

We believe we have found the source and we’ll consider what action to take next, including appropriate enforcement action against those responsible.

“We are incredibly grateful to those who reported this incident to us and encourage anyone to report signs of pollution to us on 0300 065 3000 so we can respond.”