Llangennech one year on: agencies come together to thank local community 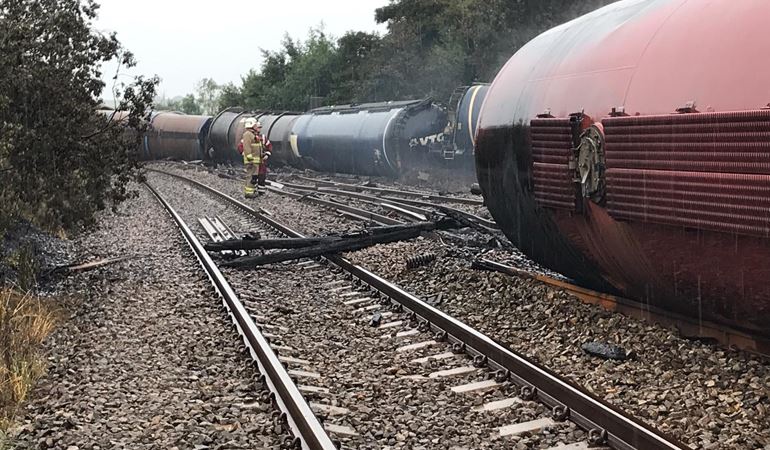 The Llangennech community had a plaque donated to them on Thursday, 26 August, marking 12 months since a freight train derailed, spilling 350,000 litres of diesel and causing a fire which could be seen from miles around.

The plaque was unveiled at the west Wales village train station by representatives of those involved in the recovery operation. This includes Network Rail, Natural Resources Wales, Transport for Wales, Adler and Allan, British Transport Police (representing all emergency services) with Nia Griffith, Labour MP for Llanelli and Councillor Gwyneth Thomas for the Llangennech ward also part of the ceremony.

Around 300 residents were evacuated from their homes by emergency services the night of the incident, due to the extent of the fire, which took firefighters almost two days to extinguish.

The local community quickly rallied around, providing emergency shelter and food for those uprooted from their homes.

Although, no one was injured in the incident, the derailment happened at a site of international environmental importance, causing major concern for the surrounding waterways and wildlife.

An extensive environmental recovery operation followed, led by Natural Resources Wales. Six months later, 30,000 tonnes of fuel-soaked soil had been excavated from beneath more than 150 metres of railway track - preventing lasting environmental impact and protecting the local landscape. The railway re-opened in March 2021, following the installation of brand-new track and signalling equipment damaged in the incident.

For now, the plaque will be kept in safe storage until it can be permanently positioned at Llangennech Station for residents and visitors to the village to see.

“It’s important we recognise the part everyone played in responding to the immediate aftermath of the derailment, the massive environmental recovery operation and restoration of the railway.

“We must also remember how frightening this was for the people locally who, despite being uprooted from their homes, rallied around, provided food and shelter - supporting each other through the toughest of times.

“The community showed incredible bravery, support and patience. One year on, we have returned to say a huge thank you to them.”

Natural Resources Wales, who considered the incident to be the biggest marine incident since the Sea Empress disaster of 1996, is continuing to regularly monitor the environment to track progress and ensure the cockles and shellfish harvested from the Burry Inlet remain to be safe.

“Natural Resources Wales coordinated the Llangennech recovery operation, and thanks to the committed response from our partner organisations, we worked together effectively to prevent an environmental disaster.

“The team consisted of dedicated, highly skilled and determined individuals working together around the clock to meticulously plan and implement a complex recovery operation. Remembering, too, that the incident was managed safely during Covid, with social distancing rules in place and when all incident management & emergency resources were already stretched.

“I sincerely hope that one year on from this incident, life is back to what it was for all the residents, businesses, industries and rail passengers that were affected at the time. The recovery task was helped by the terrific co-operation and understanding of local residents and elected members.”

“The Community of Llangennech is very thankful to the Emergency Services for their very quick response on the night and for securing the safety of the site. Also to those who worked day and night to ensure the railway line could reopen as soon as possible.

“Thanks also to the local people who gave their assistance.  As a Community we are very thankful to all involved.”