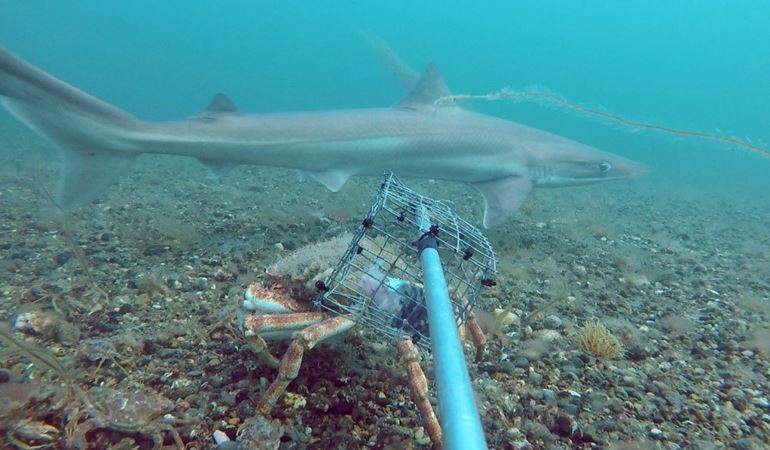 Project SIARC (Sharks Inspiring Action and Research with Communities) offers communities the chance to get involved in safeguarding some of the rarest marine species in Wales such as angelshark, tope, common stingray and spurdog.

People of all ages can dive into marine conservation and learn about the extraordinary sharks, skates and rays living in Welsh coastal waters, in a new project which gives diverse local communities the chance to be part of a ‘green recovery’ in Wales.

Launched today (23 February 2022) by the Zoological Society London (ZSL) and Natural Resources Wales (NRW), Project SIARC is enlisting the help of fishers, schoolchildren, researchers and citizen scientists from across Wales to better understand some of the more unusual coastal species, such as the angelshark (Squatina squatina) and common stingray (Dasyatis pastinaca), listed as Critically Endangered and Vulnerable on the IUCN Red List of Threatened Species respectively.

The Welsh coast is home to a range of marine life, including 26 species of sharks, skates and rays - a group known as elasmobranchs. Elasmobranchs are an important part of Wales’ natural heritage, with significant conservation and cultural importance. Despite this, little is known about their biology and ecology.

Although community engagement and research will be focused at two Special Areas of Conservation (SAC): ‘Pen Llŷn a’r Sarnau’ and ‘Carmarthen Bay and Estuaries’, Project SIARC offers a wide range of free in-person and online opportunities, from learning how to identify elasmobranch eggcases, to helping detect sharks in underwater video footage, and scouring archives for historical information. In addition, Project SIARC will identify opportunities and break down barriers to ensure a wider range of people from diverse backgrounds are able to access and get involved in marine conservation.

This engagement will be complemented by research led by Project SIARC scientists in the SACs, which includes taking water samples to detect elasmobranch DNA, deploying underwater cameras to assess what elasmobranchs and habitats are present, and working closely with fishers to gather information on the focal species.

“Currently,  few people in Wales can witness these amazing species first-hand, but we hope that the Project SIARC citizen science opportunities, school engagement programme and outreach will bring the underwater world to your doorstep and enable a wider range of people to be involved in marine conservation in Wales.”

Several organisations are helping to deliver Project SIARC, including Bangor University, Blue Abacus, North Wales Wildlife Trust, Swansea University and The Shark Trust. It is also supported by an additional nine organisations that sit on the Project SIARC Steering Group.

Jake Davies, Project SIARC Coordinator, NRW said: “Project SIARC grew from people’s input and enthusiasm for Angel Shark Project: Wales. Communities started sharing exciting information about all sorts of sharks, skates and rays, which provided new insights on the ecology of these little-studied species. That meant we could develop Project SIARC – their input was incredible. For Project SIARC, we will use similar techniques to better understand how angelshark, common stingray, spurdog and tope use Welsh waters and how they interact with habitats protected by two of Wales’ largest SACs.”

School children are also encouraged to get involved. Project SIARC will scale up the success of online “meet the scientist” sessions from Angel Shark Project: Wales, to reach thirty schools across Wales. The project will also work with ten schools around Carmarthen Bay to try their hand at 3D printing shark models, which will be used to educate the next generation about elasmobranchs.

Mr Griffiths, Headteacher at Ysgol Gynradd Nantgaredig said: “We are very excited to get involved in Project SIARC, it will be extremely valuable for our year five class to learn about sharks, skates and rays living off our local beaches. We are particularly keen about the prospect of introducing industrial digital technologies, such as 3D printing, as a tool to reinforce teaching on sustainability, biodiversity and art. It will enable the children to really connect with the environment around them and understand how much we all rely on the natural world.”

Ben Wray, NRW Project SIARC Manager & Marine Ecologist added: “Co-led by ZSL and NRW, Project SIARC is part of a wider integrated approach in Wales driven by the Well-being of Future Generations and Environment Acts. This recognises that resilient ecosystems are fundamental to the well-being of people in Wales. By re-connecting people with nature, we can support improvements in mental health and well-being as well as encourage better stewardship of our seas and reverse the decline in biodiversity. It also highlights the interconnections of global environmental issues, such as the climate and nature emergencies.”