There is one section of the Half Marathon trail closed for repairs, please follow the on site diversions.

Sarn Helen Long - Caution - Timber haulage is taking place alongside the trail. Please obey all signage and instructions from banksmen.

The waymarked trails take runners through some of the best scenery that Coed y Brenin Forest Park has to offer.

They vary in length from a couple of miles to a half marathon and have been designed for both novice and more experienced runners.

Watch the Run. Coed y Brenin video for a flavour of the running facilities and trails at Coed y Brenin and footage from the Trail Marathon Wales event which takes place here.

The trails include an interesting mixture of forest roads and rough unmade public rights of way with occasional roots, mud and rocks. There are steep ascents and descents and occasional sections of tarmac road.

The routes go through three river valleys and up (and down!) the ridges that separate them.

Along the way, there are panoramic views of the mountains of southern Snowdonia, cascading rivers, tranquil plunge pools, heather moorland and the dappled shade of broadleaf oak woods.

The trails also go onto a Roman road called Sarn Helen. This was a major imperial route on the edge of the Roman Empire linking North and South Wales.

Get ready to run

All of the running trails are waymarked and start from Coed y Brenin Forest Visitor Centre car park.

Whether you are a beginner or a long distance runner, make sure you’re geared up for your run and the weather conditions.

The Sarn Helen Short Running Trail is a moderate route which is mainly on forest roads.  The trail climbs up onto the Cefndeuddwr ridge and then joins the Sarn Helen, an ancient Roman road, before descending back to the visitor centre.

The Sarn Helen Long Running Trail is a moderate route which includes some muddy single track paths as well as forest roads. The trail climbs up onto the Cefndeuddwr ridge before descending into the valley of the River Gain. It then follows the river upstream to the ruins of Penmaen Farm and climbs back up the hillside to the Sarn Helen Roman road. It passes some medieval ironworks and then returns along the forest road to the visitor centre.

The Goldrush Running Trail is a strenuous route which is mainly on single track paths. The trail climbs over the Cefndeuddwr ridge and then detours along two footpaths before descending to River Mawddach. After crossing the aerial bridge at Tyddyn Gwladys, it climbs up to the Copper Bog before descending past Caen Coed house. The route then joins a bridleway back down to the River Mawddach where it returns to the visitor centre on a level route alongside the River Eden.

The Half Marathon Running Trail is a strenuous route which is mainly on forest roads. The route climbs onto the Cefndeuddwr ridge and then descends via forest roads to the River Mawddach. It then includes several climbs and descents, some on footpaths, to reach the eastern edge of the forest park where there are some great views. After a short section of tarmac road, the route follows the valley floor back to River Mawddach before one final climb over the Cefndeuddwr ridge on the way back to the visitor centre.

A short route, ideal for younger runners and those testing shoes from the running shop.

Welcome to a meeting room with a view! 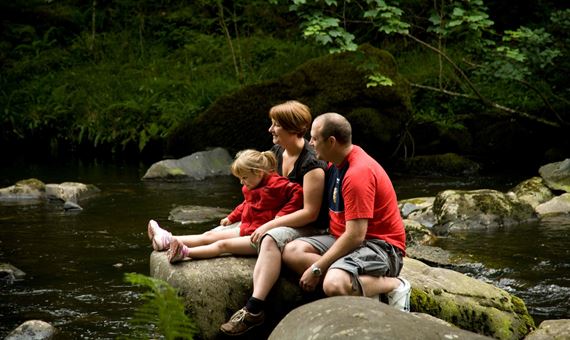 Try your hand at geocaching or orienteering and...

Map of places to visit

Get a copy of one of our regional leaflets and plan your visit...