Taclo'r Tywi - What we are doing

We know that there are a number of non-native, invasive species which are impacting on habitat and water quality along the Afon Tywi. These plants dominate habitats, and outcompete our native plant species.

Read more about the different types of species which are affecting the Afon Tywi, and what we are doing to tackle them.

Himalayan Balsam - what is it and why is it a problem? 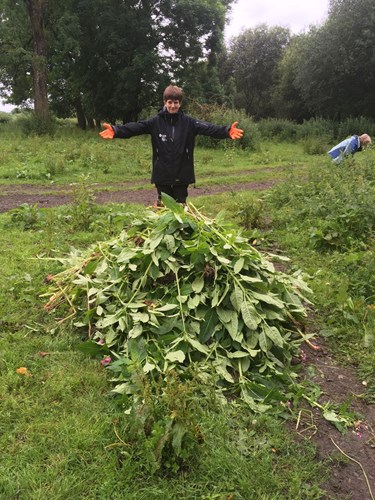 Himalayan Balsam (Impatiens glandulifera) originates in the Himalayan region and was introduced to the UK in the mid 19th century as an ornamental garden plant. It is now widespread across much of Britain, often occurring in dense monoculture stands causing serious impacts to our native habitats.

Himalayan Balsam is an annual plant, reproducing from seeds each year. The seedlings first appear in April grow rapidly to produce sweet-smelling pink flowers in June/July, and produce seeds in late August/September. Each plant produces many seed pods which explode in the autumn, scattering thousands of tiny seeds into the environment. The seeds are easily carried by water which is why Himalayan Balsam is a particular problem along water courses. Seeds can remain viable in the soil for 2 or 3 years.

During winter, Himalayan Balsam plants die back to leave bare ground. On river banks this contributes to erosion as there are no plants and roots to stabilise the bank. This increased bank erosion in turn raises the levels of silt and soils entering the rivers and so reduces water quality. Eroded banks can also increase flood risk. Download information on Himalayan Balsam and its identification.

How to control Himalayan Balsam 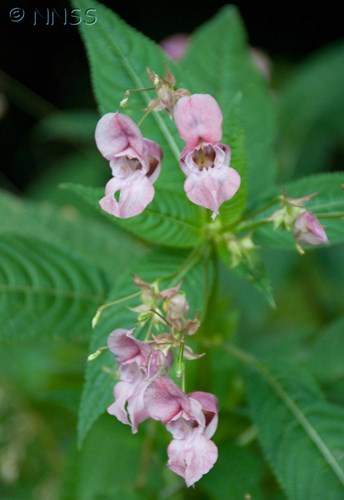 Himalayan Balsam is relatively straight forward to control as it is an annual plant, and therefore the aim is to remove the plant before it produces seeds. The plant can be pulled up, mowed or strimmed.

The best time to control Himalayan Balsam is during June and July when its pink flowers enable easy identification, but before it has set seed. If mowing or strimming, it is important to cut the plant close to the ground beneath the first node to prevent regrowth.

Herbicide such as glyphosate can also be used to treat Himalayan Balsam, and this can be a useful option in areas that are difficult to access.

Approval for the use of herbicides may be required from NRW, view more information on the herbicide approval process.

Do not attempt to control Himalayan Balsam in the autumn as your attempts are likely to inadvertently increase the spread of seeds.

When considering a Himalayan Balsam control programme, it is essential to use a top-down strategy, ensuring you start at the most upstream location. Otherwise re-colonisation is likely to take place as a result of new seeds arriving from upstream. However, any control on any scale is helpful in order to reduce the impact of the plant on our native species.

If you are intending to carry out control of large areas of HB, please get in touch with NRW so that we can advise you on appropriate methods, and ensure your proposals will not adversely affect other species (for example nesting birds, otters etc).

Leaflet : Information on Himalayan Balsam and how to control it.

The Afon Tywi is one of four areas in Wales where the Centre for Agriculture and Bioscience International (CABI) is testing a potential biological control solution for Himalayan balsam. This involves introducing a type of fungus known as a ‘rust’, which originates from the Himalayan region and actively targets the plant and weakens it.

The objective is to identify a strain of rust fungus that will naturally control the spread of Himalayan Balsam in the UK. Download more information on CABI and the biological control project 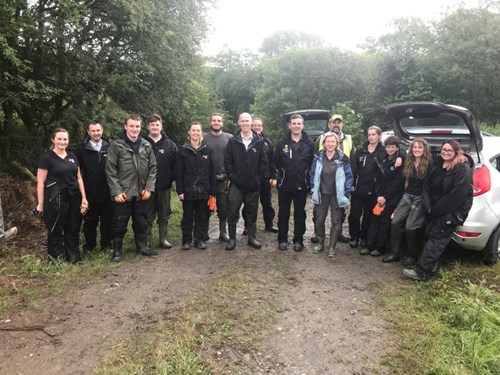 We have been supporting our partners to map the presence of Himalayan Balsam and other INNS using apps such as IRecord to get accurate information on distribution within the catchment.

We have carried out mapping work on the Bran (Llandovery) and Sawdde tributaries, as well as arranging several work parties to control HB on the Bran.

We are working with Carmarthenshire Fisherman’s Federation (CFF) to support their INNS mapping work in the Tywi catchment and advise on their Himalayan Balsam control activities.

The upstream source of Himalayan Balsam on the Tywi has been identified in Rhandirmwyn. NRW has been working with CFF and local volunteers and landowners to focus effort on eradication in the Rhandirmwyn area, using a top-down strategy. The commitment of the local community has been invaluable in achieving good results. NRW has contributed £8000 to this work to date, and hopes to continue to support this initiative in the future. 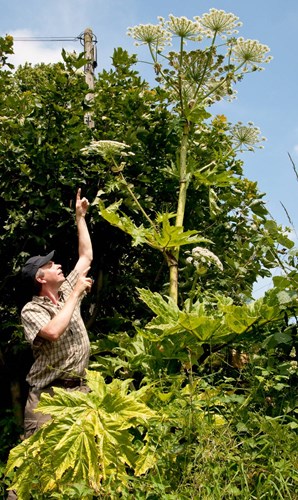 NRW has been treating an isolated population of Giant Hogweed (Heracleum mantegazzianum) in the Manordeilo area for several years. We have been successful in containing and reducing the population.

IMPORTANT! – If you suspect that you have seen Giant Hogweed, do not touch it. The sap of the plant causes serious skin irritation and blistering.

If you see any Giant Hogweed in the Tywi catchment (or elsewhere), please report it to NRW or to your Local Records Centre. 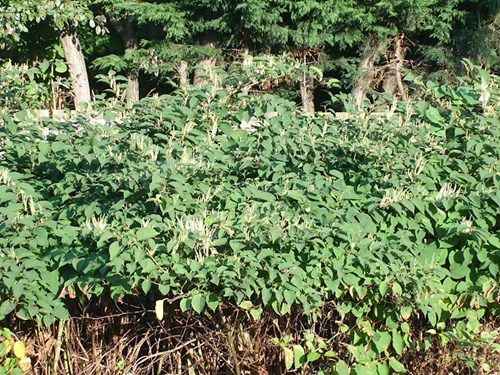 Japanese Knotweed (Fallopia japonica) is present on the Tywi and its tributaries. The most extensive growth is in the Carmarthen area. NRW carries out some targeted control of Japanese Knotweed where it poses a risk to our assets, for example our Flood Risk Management assets.

Japanese knotweed: what you need to know.

Our partners Dŵr Cymru have launched an initiative to reduce the number of nutrients entering the catchment with innovative technologies.

The ‘Weed Wiper’ scheme allows pesticides to be applied more efficiently than spraying, by simply using a custom piece of equipment to wipe the pesticide onto the plant.  This method reduces the amount of chemical runoff into the Afon Tywi. In addition, it is also more cost effective for the farmers as less chemicals need to be applied.

Dŵr Cymru are currently offering the use of the weed wipers to farmers within the Afon Tywi catchment, free of charge during the growing season.  More information is available on the Dŵr Cymru PestSmart website.

We are working with our partners Coleg Sirgar, Power & Water and the agricultural industry to develop an innovative new way to treat farm slurry, one of the biggest challenges to water quality in the Afon Tywi catchment. 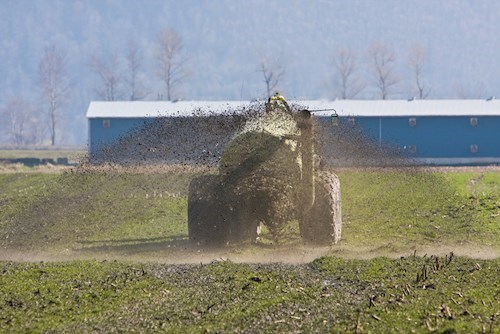 Currently still in the product development stage, It is hoped the new technology can be developed for use on individual farms to separate water from the slurry, so the only bi-products are purified water and an organic fertiliser similar to farm yard manure in consistency.

It is hoped the new technology can be developed for use on individual farms, and could make a significant difference to the number of slurry pollution incidents affecting the Afon Tywi in the future.

Taclo'r Tywi - About the project

Taclo'r Tywi - About the project
Last updated
Is there anything wrong with this page? Give us your feedback.
Print this page