The £6.1m scheme involved the construction of a flood storage reservoir upstream of the town of Pontarddulais and provides a 1 in 100 year standard of protection (1% chance of flooding in any year) to 224 residential and 22 non-residential properties in Pontarddulais.

The scheme was officially opened on 14 March 2019 by the First Minister and Minister for Environment, Energy and Rural Affairs.

Whilst the schemes primary objective was to reduce the risk of flooding to Pontarddulais, our flood risk management projects also look to deliver multiple social and environmental benefits. 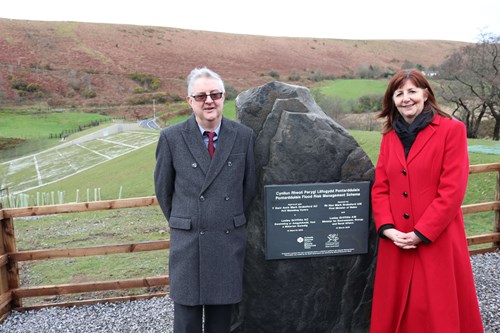 Historically, there has been a significant threat of fluvial flooding within the town due to the limited flow capacity of the channel. There are several low bridges that restrict the flow as well.

The town’s defences were considered to provide a 1 in 20 year level of protection, meaning there was a 5% chance of the defences overtopping in any year.

224 residential and 22 non-residential properties were at risk of flooding during a 1% (1 in 100) annual chance event, which would result in the entire town centre being flooded.

We looked at the whole catchment to establish the current flood risk, the causes and possible solutions to the flooding problem. We assessed each option for its benefits and risks; taking into account technical, environmental, social and cost factors of each one.

We considered options such as in line defences (flood walls) through the town, but we discounted this option as construction would’ve been extremely difficult working in a confined space, and it would have been very disruptive to the local area as major modifications to road crossings and bridges were required.

Other options we looked at, but discounted, included:

We concluded that the preferred option for Pontarddulais was upstream flood storage as it was less disruptive to people, had less visual impact and there was an opportunity to design ecological benefits into the scheme.

The flood storage area contains an earth embankment with a culvert running though it to restrict the amount of water flowing downstream during a storm, reducing the risk of flooding. Water will back up behind the embankment and flood the Dulais valley, which is sparsely developed, with scattered farmsteads and cottages dotted along the valley sides and upland areas.

The flood storage area can store 170,000m3 of flood water, which is almost the same as 70 Olympic size swimming pools. 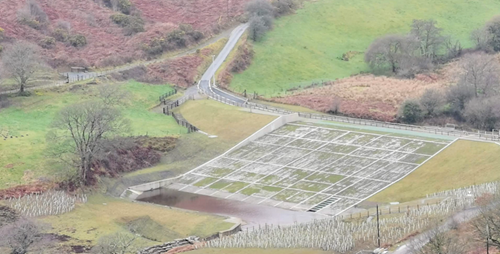 We flew a drone over the scheme during construction and after it was completed to give you a bird’s eye view. Take a look at this video.

The scheme has also delivered wider benefits to local people and to wildlife.

The flood storage area has been constructed near the site of Graig Merthyr Colliery.

The coal was transported from Graig Merthyr colliery to Pontarddulais. Initially this was done by horse and cart until a steam locomotive was purchased in 1890.