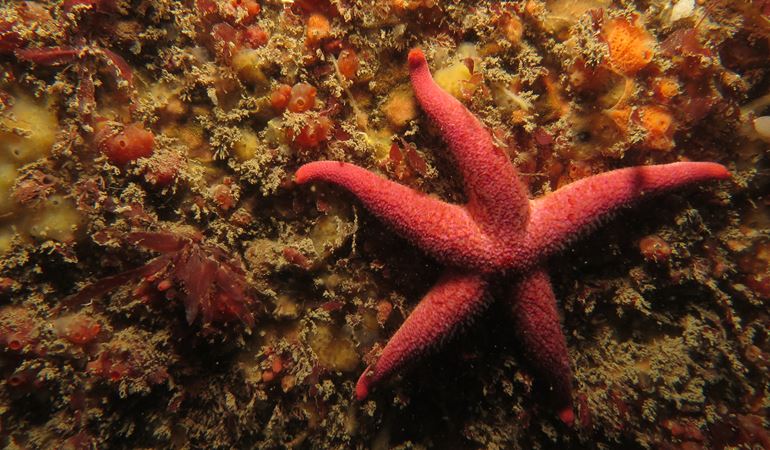 “Thirty years ago, very few people knew about the hidden, underwater world off the Pembrokeshire coast.  To most it was just out of sight, out of mind.

This year, I am very proud to celebrate the Skomer Marine Conservation (MCZ) Zone’s 30th Anniversary. As the only MCZ in Wales, Skomer is a very special site that is home to a wide range of of marine life.It has been a golden opportunity for us to get a better understanding of underwater life around Wales’ coast so we can protect and enhance the environment as well as the creatures living within it.

A team of four NRW marine scientists work at the Skomer MCZ. They are responsible for the management of the site and completing an extensive marine monitoring programme which has built on the marine biological surveys started in the 1980s.

Marine monitoring includes underwater and shore species and habitats, marine mammals, oceanographic and meteorological in addition to recording users such as recreational visitors and commercial fishing activities. The monitoring work provides long-term data sets which for some projects extend back 35 years and with the breadth of work it is recognised as the most comprehensive marine monitoring programme in the UK.

Skomer MCZ is situated  where northern and southern species overlap, there is a huge variety of wildlife of all shapes and colours – making it a great place to study and monitor changes in the marine environment. With climate change and other challenges facing the marine environment, it is more important than ever that Skomer continues to flourish as a place of learning and conservation.

Its journey to MCZ status was neither easy nor quick – it started back in 1971 thanks to a group of local naturalists and biologists from the Field Studies Council. Together, they brought a case for Skomer as a marine reserve to the attention of various influence groups.

After years of hard work, Skomer Marine Reserve Management Committee was established in a truly local and national effort. It decided that Skomer should safeguard the shoreline, provide a "quiet zone" around the internationally important seabird breeding colonies of the National Nature Reserve and, identified the potentially damaging effects of commercial fishing by bottom dredging, that are so widely known today.

Its importance became increasingly clear until eventually, its potential contribution to marine safeguarding could only be realised.  It was finally designated a Marine Nature Reserve in 1990  and then changed its name to a ‘Marine Conservation Zone’ in 2014.

By now, Skomer MCZ has worked with a wide range of stakeholders from the academic, commercial and recreational sectors to achieve the best outcome for marine wildlife. For many of them it has been the continuation of work they started decades before to gain recognition for the area.

For others, their involvement has been more recent and, in the case of our many volunteers, even more personal as they have helped us achieve an ambitious monitoring and management programme.  We owe a huge debt to all of them and hope to be able to honour their investment in the site by continuing the work for many years to come.

To see the reports, you can follow this link  or go here for more information on Skomer Marine Conservation Zone.