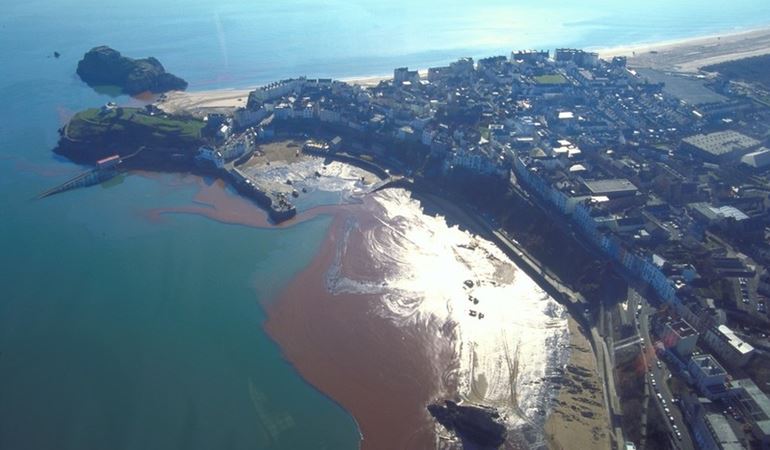 It was one of Wales' worst environmental disasters. On 15 February 1996 the Sea Empress hit rocks off St Anne's Head as it entered the Milford Haven Estuary and was holed below the waterline. Over the next few days, severe weather hampered attempts to bring the vessel into Port.

Over 72,000 tonnes of oil was released into the sea. 120 miles of the coastline was contaminated and there were huge impacts on marine wildlife, including thousands of seabirds. Many of Pembrokeshire's iconic tourist spots such as Tenby and Skomer Island were affected, as well as the local fishing Industry.

In the days and weeks that followed, staff from a whole host of agencies as well as volunteers, worked tirelessly to rescue oiled birds and remove oil from beaches.

Now 25 years on Andrea Winterton, our Marine Services Manger looks back at the Sea Empress oil spill that affected one of our most beautiful coastlines.

"Twenty-five years ago I was  working as an Assistant Conservation Officer in Pembrokeshire visiting a farm to discuss a  hedgerow renovation scheme when I found out about the incident. And like everyone else in the team I was drafted in to help - it was all hands-on deck.

"It was early days for regarding joint working between response organisations, but we were already learning from previous incidents.  I spent my time in the meeting room at the Milford Haven Port Authority offices that had been taken over as a joint response centre. I worked on the "environment" desk, alongside colleagues from other agencies.

​"They were long, intense days, made even more difficult by the fact that for the first few hours, there was only one phone, which I had to answer and one fax machine!

​"On our desk we were responsible for advising on the environmental sensitivities and affects. Seabirds were hit hard during the early weeks of the spill. More than 2,000 dead or oiled seabirds were collected in the aftermath of the spill in Pembrokeshire. But the oil drifted much further – and into Carmarthen Bay where we know at least 3,500 common scoter died.

"Huge swathes of shoreline were oiled, impacting a large number of beaches and rocky shores, saltmarsh and mudflats. As well as sea birds, other marine wildlife on the shore was smothered, including seaweeds, rockpool life and shellfish such as cockles and mussels.

"One of NRW's predecessor bodies – CCW – commissioned a special report to investigate the long-term impacts of the oil spill a decade on from the incident. It found that nature had recovered remarkably. The immediate decline in sea bird numbers following the spill was reversed and there was a long-term upward trend in seabird population.

​"Likewise, there were no known long-term impacts on marine mammals such as dolphins and seals, and the vast majority of shores and shallow seabeds affected returned to normal within two to five years.

"This recovery shows how nature can adapt and recover, even from major accidents, if it has the time and space to do so. But we cannot rest on our laurels.

"The scale and environmental impact of the disaster were very apparent, as indeed were the economic ones with both tourism and fishing taking a hit. The oil was easy to see and because the impact was so obvious there was impetus for the clean-up and recovery work.

"But one of the real dangers for the marine environment is that it's "out of sight, out of mind" and people can often take this amazing resource for granted. Many impacts from our activities may not be as obvious as the oil but may be equally or indeed more challenging to deal with.

"The health of our marine environment is key to helping us deal with our climate and nature emergencies.  As the champion of the natural environment in Wales, NRW alongside our key partners, is working hard to increase the resilience of our marine habitats to future challenges, and of course, to climate change.

"The current lockdown and constraints on our activity has also shown how important the natural environment is for health and well-being and it can play a key part in our recovery.

Learning from the past

"Whilst twenty-five years have passed – it feels like only yesterday!

"All the organisations involved learned a lot during that incident. We continue to work closely together to improve our response to incidents like this and we coordinate exercises regularly, so that we can be as prepared as possible should anything similar happen again.