Work goes on for NRW in aftermath of storm 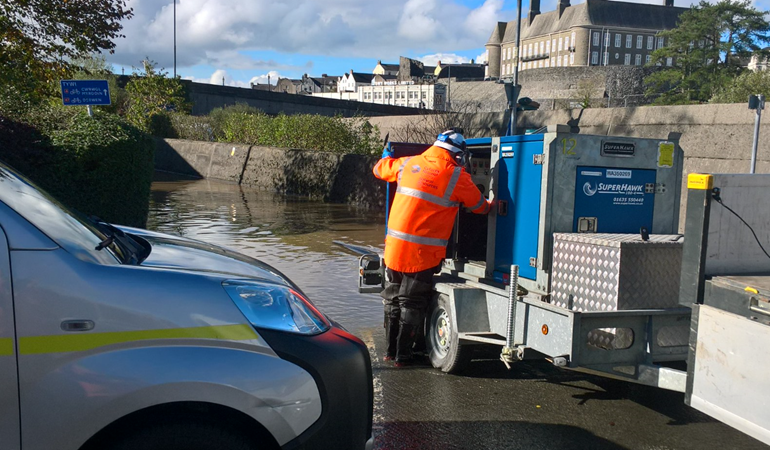 After a weekend of heavy rain and floods which hit South West Wales particularly hard, the clear up has begun.

For Natural Resources Wales officers this means inspecting flood defences and other assets to assess and repair any damage caused by the high river levels and volumes of water.

“Our sympathies go out to anybody impacted by these floods and Storm Callum, it is an unwelcome reminder of the damage that severe weather can do.

“While some communities were significantly affected, for many the flood defences did their job and reduced the worst of the impacts.

The weekend storm caused 80 properties to flood across south west Wales and led to major disruption of businesses and transport across the whole of the country.

The River Teifi at Llandysul reached its highest level since records began in 1971 and the Tywi above Carmarthen was at its highest since 1987.

In Abergwili, in the Tywi Valley, the flood gates were closed and prevented flooding despite the water level rising to within 180mm of the top of the gate, just short of the evacuation trigger of 150mm.

More people than ever visited NRW’s website to check the latest flood warning information. Before and during Storm Callum NRW’s flood pages received more than half a million-page views, while warning and informing messages on social media reached over 110,000 people.

“After any major flooding event there are lessons to be learned and Storm Callum is no exception, so we will review what took place and how we responded to identify where improvements can be made.

“As is usual after any flood event, we now have our people out and about checking our defences for any damage, and to ensure they can continue to help protect people and property.”

“We won’t just look at the flood defence network, but also at our incident response and our warning and informing before, during and after the incident.

“While there were significant impacts in some areas, the initial indications are that these elements worked well.

“We will be working with our partners in local government and the emergency services to ensure we continue where possible to reduce the impacts of incidents like this.”