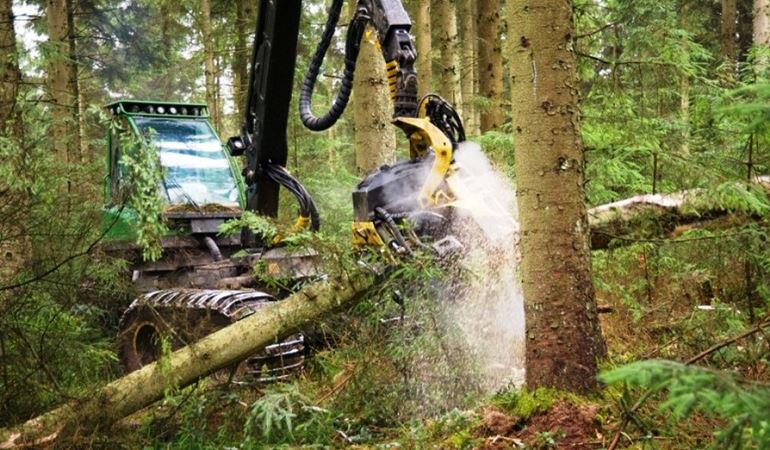 Natural Resources Wales has today (Monday 11th May, 2015) begun their major tree felling operations at Cwmcarn Forest to slow the spread of Phytophthora ramorum, a disease which is attacking larch trees.

The work will remove up to 150,000 larch trees at the site which have become infected with the fungus-like disease and need to be felled as part of a nationwide strategy.

The disease has infected approximately 6.7 million larch trees in Wales and kills the tree once it is infected.

Despite this extensive felling work, the Visitor Centre, run by Caerphilly County Borough Council, and all other facilities at the site will remain open.

“Unfortunately, we cannot stop larch disease from spreading, but we can take action to slow it down. This means felling all the larch trees at Cwmcarn Forest.

“It is sad that we have to fell so many infected trees, but it does provide us with an opportunity to replace them with a range of resilient, native broad-leaf woodland trees, as well as more commercial timber producing trees, such as spruce.

“We will plan our work to make sure there will always be parts of the forest for people to enjoy. We will keep you informed of any planned trail closures or diversions as early as possible via our website, social media channels and the Visitor Centre.

“Parts of Cwmcarn Forest have now become an operational harvesting site. These areas will be clearly sign posted. It is vital that members of the public don’t enter these areas for safety reasons.”

Due to the scale of the operation and the forest’s steep gradients, it would not have been safe or practical to keep the Forest Drive road open during the felling and harvesting operations.

“We know Cwmcarn Forest and the Forest Drive road has a special place in the hearts of local people and visitors so we’re already working on a plan to replace them with a range of other species to make the woodland more ecologically diverse and less susceptible to disease.

“We have already started to explore options for the future of the Forest Drive road, including looking at possible funding or partnership opportunities to reopen or partially reopen the existing road. We’ll continue to actively explore these options and consult with local residents and other interested parties. “

To manage the spread of the disease, Natural Resources Wales has so far felled nearly 3 million trees across Wales. They are planting more than 3 million trees annually with some of these replacing the larch trees that have been felled.

The felling provides the organisation with an opportunity to recover some of the economic value of the timber which is subsequently reinvested into the Welsh Government’s Woodland Estate.