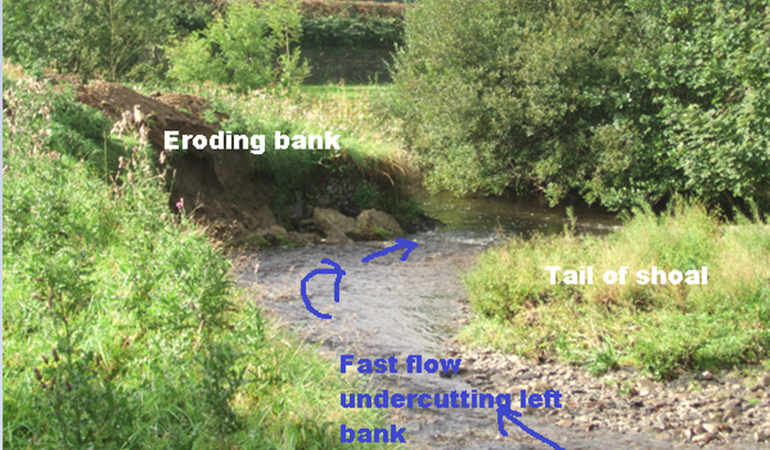 A green engineering solution by Ceredigion County Council, in partnership with Natural Resources Wales (NRW), has restored part of a river in Ceredigion and created a better habitat for fish to spawn.

The narrow bridge over the Afon Aeron in Llangeitho, Ceredigion, has caused erosion problems for decades.

Previous efforts to solve the problem have only made things worse by creating a large gravel island and causing serious erosion upstream.

Some unwanted leylandii trees have been placed on the riverbank to prevent further erosion and two trees were partly inserted into the bank, the main trunks sticking out into the river, to divert the flow.

This has created a natural barrier – called a “croy” – which protects the river bank and diverts the main river flow onto the gravel island.

This slowly reduces the gravel bed, creating pools for fish and leaving fine gravel which the fish need to spawn.

“This project is exciting because it has so many benefits. It uses our natural resources in a way that benefits the landowner and nature.

“The Aeron is an important spawning ground for sea trout, salmon and brown trout.

“Salmon and some sea trout populations in Welsh rivers are in serious decline and we have to do all we can, as soon as we can, to save them.

“We worked with Ceredigion Council and the landowner to find a natural solution, working with the river, rather than trying to constrain it.

“This has restored the river to a more natural state, improving water quality, creating pools for adult fish and leaving fine gravel which the fish need to spawn”.

The bridge, built in the 1950s, “pinched” the river, forcing it to go faster through the narrow space under the bridge and slowing the water down upstream.

This caused sediment to drop, which, over time, created the gravel island.

By the 1970s the erosion became so bad that the local authority was worried the river would bypass the bridge and cause serious damage to its structure.

To resolve this, gabions were installed upstream.

But these damage the river’s natural function and just push the problem further upstream.

They also create such a rush of water that only large sediment gets deposited, which smothers the habitat for fish and invertebrates.

By 2016, the big gravel island was pushing the river wide, eroding both banks and attacking the gabion end on the left bank.

Submerged croys can last for decades and, over time, as sediment builds and species such as willow grow on top of them, they will create a permanent natural barrier.