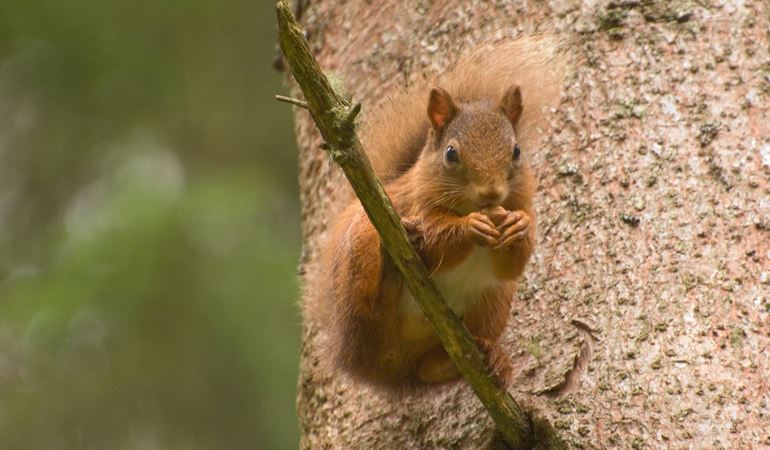 Earlier this year, NRW released seven red squirrels in Clocaenog Forest as part of a project to secure their future.

And now, wildlife cameras have provided the first evidence of breeding, capturing videos of a young squirrel exploring outside.

“Red squirrels are such an important part of our environment, our heritage and our culture in Wales and we have a duty to protect them for future generations.

“We believe two of the females we released have had young and the video shows one of the baby squirrels - it is a bit shaky on its feet but great to see.

“But what’s really interesting is that it has a pale tip on its tail which is characteristic of Welsh genetics.

“This has lead us to think that one of the females we released bred with a wild Clocaenog male which is really exciting – and shows how well they are settling in.”

They are being monitored closely by NRW and local volunteers from Red Squirrels Trust Wales who regularly check cameras in the forest to see where the squirrels are going and how they are doing.

Some of the squirrels have also been fitted with radio collars so the volunteers can track their movements.

People can volunteer to join the project to protect red squirrels in North Wales by emailing beckyredsquirrel@gmail.com.

“We are so pleased to see young reds jumping about and exploring the forest.

“It is a real boost to the project considering all the hard work and hours that has been put in by everyone!”

Clocaenog Forest is one of three priority areas for red squirrel conservation, along with Anglesey and mid-Wales.

It has a mix of tree species which is great for the red squirrels who feed on the seeds.

In 1998 there were up to 400 red squirrels in the forest, but there are now thought to be less than 50, prompting NRW to take action to help secure their future.

NRW will continue to work with the RSU volunteers to track progress and are planning a second release later this year.