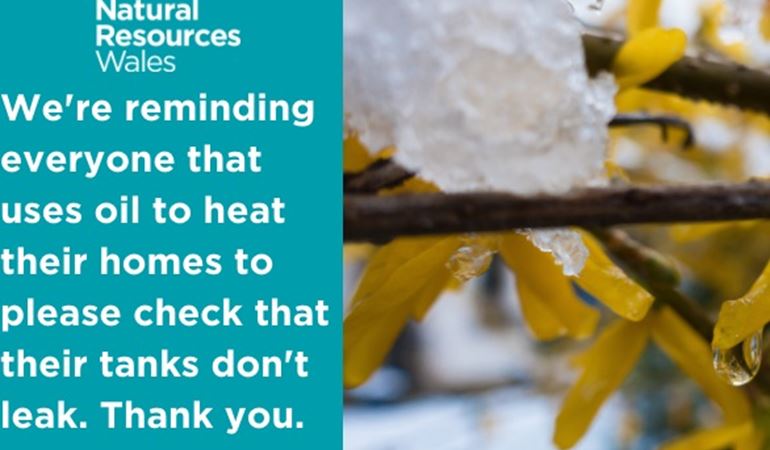 Homeowners who store oil have a legal responsibility to make sure it doesn’t cause pollution, yet a large number of incidents resulting from tank leaks are still recorded each year.

The damage caused to the environment by leaked oil are far-reaching – it can kill plants, harm wildlife, pollute rivers and contaminate drinking water.

Euryn Roberts, NRW Senior Environment Officer said: “Domestic heating oil can seriously impact the environment, yetthe majority of spillages can easily be avoided by regularly checking tanks and their pipework and by keeping them well maintained.

“As well as causing environmental damage, homeowners will also be very aware of the cost of replacing lost oil, so it’s in their interest to make sure their oil storage tank systems are in good working order. Cleaning up an oil spill can also be costly and, with the possibility that insurance companies may not pay out for spills from neglected or non-compliant systems, could leave householders facing additional bills of thousands of pounds.

“We don’t want this to happen, which is why we are urging oil users to check their storage facilities regularly for any changes such as cracks or small leaks – especially during the winter months.”

Guidance on the Oil Storage Regulations for Wales can be found here.

Suspected pollution and other environmental incidents can be reported 24 hours a day via the NRW incident hotline on 0300 065 3000 or email icc@naturalresourceswales.gov.uk