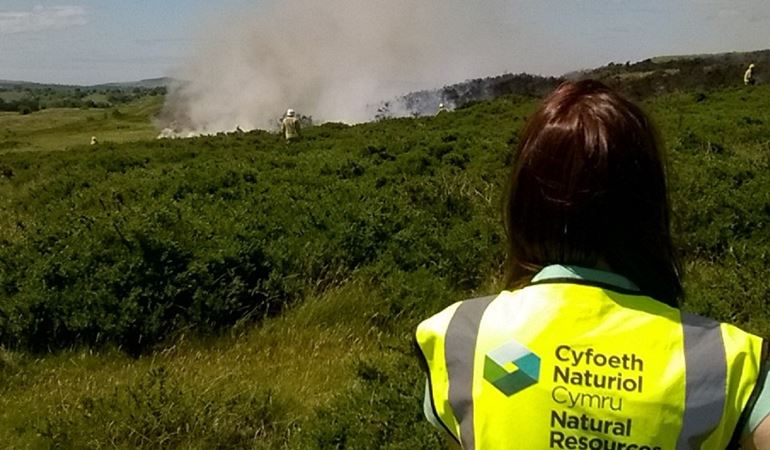 Officers from Natural Resources Wales are appealing for help after a spate of suspected arson attacks at a protected area near Flint.

Four fires at Halkyn Mountain have been reported to North Wales Fire and Rescue Service (NWFRS) in the last month, and are believed to have been set deliberately on common land between the villages of Halkyn and Brynford.

The rare grasslands and heathlands are home to protected species, such as the great crested newt and other amphibians, protected by European law.

It has been designated as a Site of Special Scientific Interest (SSSI) and a Special Area of Conservation (SAC), which Natural Resources Wales (NRW) is responsible for protecting in Wales.

“Fires are particularly damaging in summer because they harm nesting birds and other wildlife that thrive there this time of the year, such as butterflies, newts and snakes.

“Uncontrolled wild fires can cause temporary loss of habitat and wildlife, while repeated burning can also damage the land for agriculture as well as conservation”.

NRW are appealing for anyone that has any information about the causes of the fires to contact North Wales Police on 101.

Anyone starting a fire on a SSSI, without consent, can be fined up to £20,000

“The recent dry weather has increased the risk of rural fires and it is extremely disheartening to find that many of these incidents have been ignited deliberately.

“Deliberate fires place tremendous pressure on resources, with our crews tied up for a considerable length of time trying to bring them under control - which in turn delays firefighters from attending life threatening incidents.

“The potential for serious damage to our environment, often in sensitive areas, by the impact of countryside fires is a serious concern.

“Setting deliberate fires not only damages wildlife, but also puts our firefighters and the public at risk.

“Arson is a criminal offence and North Wales Fire and Rescue Service is actively working alongside North Wales Police to combat deliberate incidents.”

Anyone with information on such crimes is advised to anonymously call Crimestoppers on 0800 555111 or contact 101.

Fires at Halkyn, or any other SSSI, should be reported as soon as possible on 999 to minimise the damage to people and to wildlife.

You can follow NWFRS’s campaign to reduce deliberate fires on social media by following #helpstopdeliberatefires or on the North Wales Fire and Rescue Service website.