Anglers called on to release all salmon 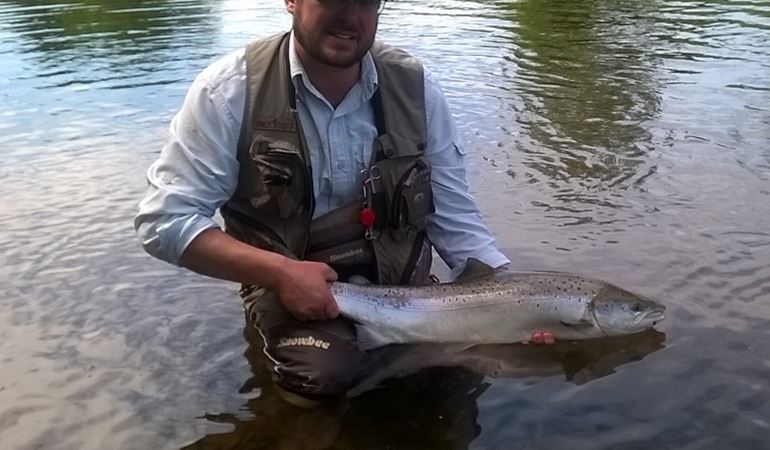 Anglers in Wales are again urgently being asked to help conserve fish stocks by releasing all the salmon they catch in 2017.

Natural Resources Wales (NRW) has made the request as the number of salmon in Welsh rivers continues to give cause for serious concern.

“The salmon is an important part of our environment and our culture in Wales, so it is essential we do all we can to help preserve as many fish as possible.

“We would like to see anglers and netsmen voluntarily release all the salmon and more of the sea trout they catch to ensure more fish survive to migrate upstream to spawn and produce juvenile fish to help boost stocks.”

Fish stocks in 23 salmon rivers and 33 sea trout rivers are assessed annually in Wales and placed in categories according to their risk of failing to achieve important stock targets.

The assessments for 2016 show that all but two of the 23 salmon rivers (Severn and Usk) are failing to reach their management target and are either ‘at risk’ or ‘probably at risk’. For sea trout 16 of the 33 rivers assessed are in a similar poor condition with a low level of spawning fish.

About 78% of salmon and sea trout are released after being caught although this includes existing statutory controls. The number of fish returned on a voluntary basis is around 60% during the summer.

“Although stock levels continue to be a cause for concern, some Welsh rivers are showing positive signs.

“The Wye showed a really encouraging improvement in salmon numbers in 2015 and 2016 and we predict it will move out of the ‘at risk’ category by 2020 to be ‘probably not at risk’.

“We believe this is the result of a combination of earlier catch and release and other fishing controls.

“There have also been significant improvements in habitat and water quality brought about by a strong partnership approach on the river principally with the Wye and Usk Foundation but also the Environment Agency, Dwr Cymru Welsh Water and NRW.

“The River Ogmore is also worthy of mention with Ogmore Angling Association introducing their own rules to ensure 100% of the salmon caught are released.”

“The number of fish, and salmon in particular, migrating into many Welsh rivers was worryingly low again last year. We have seen very poor catches especially of summer grilse (salmon returning after their first winter at sea) for the past three years.

“Most anglers are already voluntarily releasing the fish they catch but we feel the situation is now so serious for salmon that we must ask all anglers to release all of their salmon.

“We are considering further regulation and have been actively engaging with anglers and other interested parties to help encourage greater voluntary efforts.

“Survival of salmon at sea has declined markedly and is currently at a historic low. It is difficult to tackle this, but there are additional pressures on our fish stocks these days including habitat damage, pollution and illegal exploitation and we can do something about these.

“While this is ongoing, anglers releasing their fish is one of the most effective way to help safeguard our stocks by allowing more fish to survive and spawn.”

To give fish the best chance of survival, it is important that fish are handled with the utmost care and released as quickly and as carefully as possible.

Anglers can help by using barbless single or double hooks, playing the fish quickly, keeping it in the water at all times and supporting the fish facing into the current until it is strong enough to swim away.

Methods such as the use of worm and treble hooks can seriously reduce a fish’s chances of survival and anglers are urged to use other methods.

Catch and release is one of several initiatives to improve Welsh fish stocks.

Over the last 15 years Natural Resources Wales, in partnership with Rivers Trusts, Welsh Government and the Sustainable Fisheries Programme, has invested millions of pounds to improve stocks.