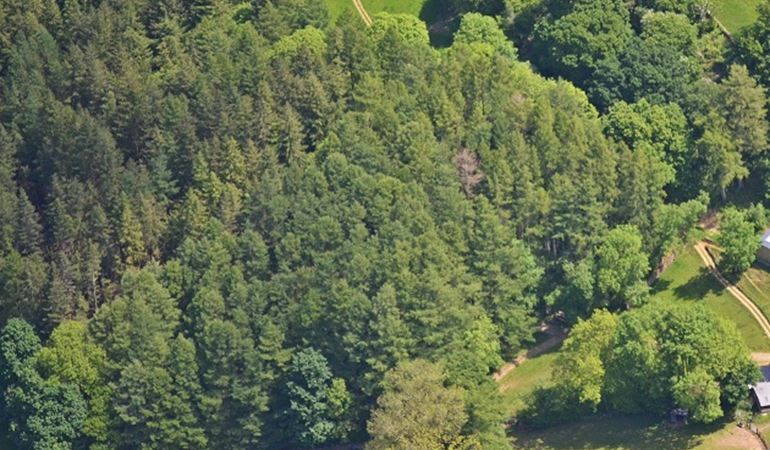 Aerial footage of forests and woods around Wales show that the spread of deadly tree disease P.Ramorum (Phytophthora Ramorum) is down on last years’ findings.

Aerial footage taken by Natural Resources Wales of forests and woods around Wales show that the spread of deadly tree disease P.Ramorum (Phytophthora Ramorum) is down on last years’ findings.

Around 40 sites were seen to be showing signs of suspected infection and will be further investigated.

The figure is lower than was found following last years’ flight when nearly 30 suspect sites were found on Welsh Government Woodland Estate alone, as well as another 20 sites on private land.

“Compared to previous years the spread of P. Ramorum in 2015 was fairly minor.

“We will be visiting the sites identified in the flights this year over the next few weeks to find out whether P. Ramorum is present, and whether we need to take further action in those areas to tackle the spread of the disease.

“We were preparing for a far wider spread of infection.

“We expected a significant increase in infection due to the wet and windy weather in late summer and early autumn.

“But that has not proved to be the case so far.”

Lajla continued:"Our teams have done a huge amount of work over the past couple of years to help tackle the spread of larch disease, but it's too early to tell whether this has had a significant impact on reducing the spread."

Since March, Natural Resources Wales or have been highlighting the need for visitors and workers to forests and woodlands to #Keepitclean in a bid to stop the spread of P Ramorum and other diseases

The campaign, highlights how visitors and workers can safeguard our forests and woodlands future by heeding simple advice.

Lajla added: “It’s not just P.Ramorum, there are a number of pests and diseases that threaten Wales’ woodlands.

“And one of the ways they can infect a healthy forest is by being transferred by the mud and debris on people’s boots, car or bicycle tyres or even on a dog’s paws.

“We are asking people to take a few minutes before visiting a woodland to clean dirt and mud off boots, tyres, kit and pets.

“We hope that checking and cleaning before every woodland visit will become a habit.”

A further aerial flight will take place later this summer.

For more information on our #Keepitclean campaign visit https://naturalresources.wales/forestry/tree-health-and-biosecurity/biosecurity/?lang=en