Each month our teams write a blog about the special places they look after. Here, Kate Lock, our Marine Conservation Officer at Skomer, talks about a species that isn’t usually known as spectacular…

Slugs are not usually considered the most endearing of creatures, especially to gardeners, but take a look 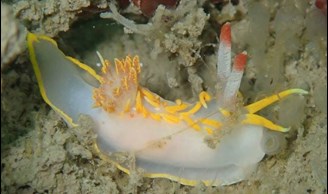 at their underwater relatives, the nudibranchs, and you might think again.

Nudibranch are marine gastropod molluscs (more commonly known as snails and slugs) which shed their shells.

And the name nudibranch means ‘naked gill’, referring to the external breathing organs which can be seen in many shapes, from flower-like plumes to club-like processes on their backs. 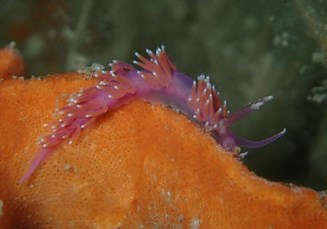 Divers love their extraordinary colours and striking forms that range from 2mm to 60cm in size, and they have been given colourful nicknames to match, such as ‘Crystal’ and ‘Dragon’.

It is believed that only half of the total number of nudibranch species has been discovered so far, despite an impressive 3000 or so recorded to date!

Top of the food chain

Nudibranch are important for our ecosystem. They are specialised predators, with each species of nudibranch feeding on its own particular prey, such as sponges, hydroids, sea squirts, bryozoans, anemones and corals.

They can cleverly store the stinging cells and chemicals from their food, creating their own chemical defences and as a result very few other animals like eating them. As animals at the top of the food chain they are important indicators of the health of the habitats - their presence tells us a lot about the eco-system as a whole.

Our diver team at Skomer Marine Conservation Zone (MCZ) are in danger of turning into nudibranch “twitchers” at the moment.

The diversity of nudibranch species is a conservation feature at Skomer MCZ and we work hard to learn more about them and protect them. We started carrying out surveys in 2002 and they are completed every 4 years - producing an important long-term dataset. 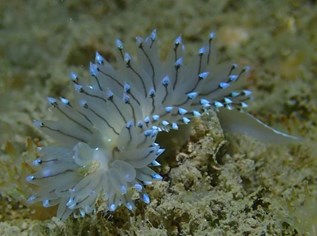 We have found that there is an abundance of different nudibranch species within a fairly small area, with 78 species recorded over the years – this is around 70% of all UK species which we believe is due to the range of different habitats that support a variety of food sources here.

Last month we carried out our 2-week nudibranch survey, with support from some very experienced volunteers. These include Bernard Picton, a leading European expert in nudibranch taxonomy.

We dive underwater equipped with digital cameras, lights and sampling bags. Some nudibranch species are brightly coloured and easy to spot, but many others are superbly camouflaged.

To find these the we need to hunt for the different prey species and look for nudibranch eggs. Usually laid 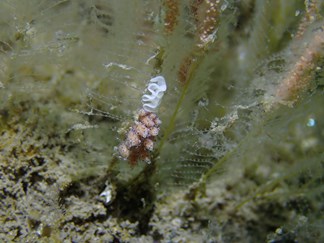 in ribbons or rosettes, the shape can help identify the species laying them, we then carefully look for the tiny camouflaged nudibranchs.

Back at base, we carefully go through photos and pour through identification books and websites. Samples are studied under microscopes, some are preserved for DNA specialist work and the rest returned to the sea.

So far this year, 58 species have been recorded, including some never before seen in the waters around Skomer. The team will continue checking sites for more species as some appear later in the season than others.

Alongside the survey, Seasearch, a national volunteer diving project, organises a ‘Nudiblitz’ at Martins Haven. The aim is to record as many species as possible over a weekend.

An incredible 30 species were found at this single site with 34 volunteer divers taking part. The valuable contribution by all the volunteers, to the work at Skomer MCZ can’t praised enough.

Skomer is just off the coast of Pembrokeshire, it is so rich in plant and animal life that it has a unique status in Wales.

The waters around Skomer Island and Marloes Peninsula have been designated a Marine Conservation Zone. This is the only stretch of water in Wales to have such a protected status and it is managed by us at Natural Resources Wales.

Skomer Island itself is a National Nature Reserve, famous for its seabird colonies and wildlife. It is managed by the Wildlife Trust of South and West Wales and you can find out more about it on the Wildlife Trust’s website.