Continue
Home > About us > News and events > Blogging from our special places!

“Fair seagull on the seething tide” 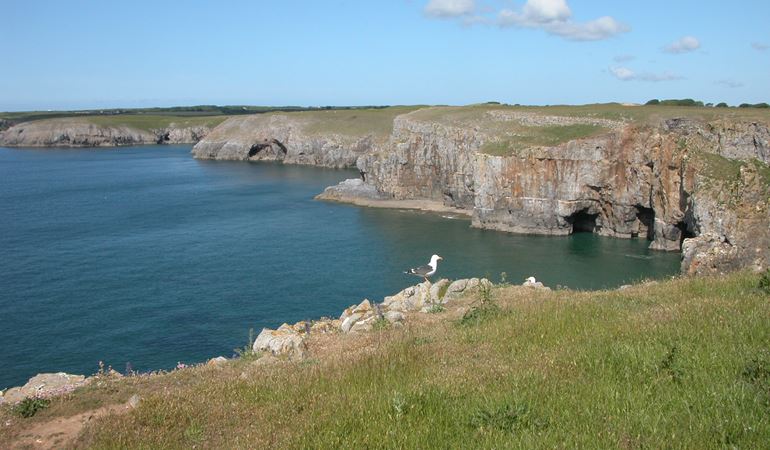 This month's blog is from Paul Culyer, Senior Reserves Manager for Pembrokeshire...

Who does not find it exhilarating to watch seabirds wheeling above the waves or riding the wind along a sea cliff?

I think the opening line (and title of this blog) from Dafydd ap Gwilym’s poem ‘Yr Wylan’ or, ‘The Seagull’, evokes this image beautifully.

Every spring and summer the cliffs at Stackpole National Nature Reserve (NNR), near Pembroke, are home to a wealth of seabirds. Colonies of razorbills and guillemots, along with nesting gulls, fulmars and even a few puffins breed here each year.

The guillemots and razorbills are members of the ‘auk’ family - they are birds of the sea and only come to land in April, May and June each year.

Big and smelly, but equally beautiful

If you come along to the reserve now you will see 1000 of guillemots who form large, noisy (and sometime smelly!) colonies.

You will also see razorbills who nest in smaller colonies, with pairs often returning to the same nest site each year.

Dotted amongst these larger seabird colonies greater and lesser black backed gulls and herring gulls. All three looking to make a meal of the eggs or chicks of their neighbours.

A real wildlife spectacle on our doorstep in Wales! 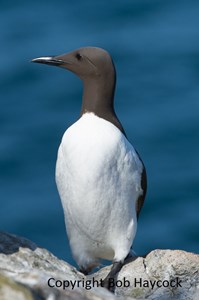 Laying eggs on a cliff edge

In May, the female guillemots and razorbills lay their single egg on the precarious nesting ledges 20-30 metres above the sea. Thankfully their eggs are a conical shape so they roll in a circle and don’t drop off the edge.

When the chicks hatch and are ready to leave the nest they fly, well fall, to the sea, fluttering their wings to slow their descent. It’s another two weeks before the chicks can properly fly and swim, and then another two months before they leave Stackpole for winter in the Mediterranean.

The birds spend the spring and summer days flying backwards and forwards to the nesting ledges. If you look carefully, you will see their unusual rapid wing beats. They have relatively small wings for their body size which makes them inefficient for flying, but great for diving and swimming underwater to catch their prey! They normally dive to around 25m but can dive much deeper to well over 100m depth.

We also have about 20-30 pairs of fulmar at Stackpole – this bird is the smaller cousin of albatrosses found in the southern hemisphere. It has very straight wings which it 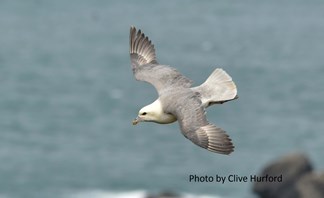 uses to glide along the cliffs.

The name comes from the Old Norse words for foul gull, and this derives from its defence mechanism of projectile vomiting an oily stinky liquid onto anything getting too close.

This can completely clog up the feathers of predatory birds causing them to fall to their deaths. Rock climbers are also well advised to steer clear! Like the auks outside of the breeding season they spend all their time at sea, so now is a great time to see them.

In June, I arm myself with binoculars and head out to count the birds at the Nature Reserve. This can involve getting on a boat and counting the birds from the sea, or standing on the shore if the sea is too rough.

It’s so important that we do this because it means we can monitor how the birds are doing, and it provides us with important evidence which helps us (at NRW) offer advice or make decisions. In “Yr Wylan” the seagull is sent as a messenger, and perhaps we might look at how our seabirds fair as giving us messages about the health of our seas.

Seabirds can live for around 20, but some can live to 40+ years. I really like the idea that I could be counting the same birds throughout my career!

I couldn’t do this alone though, we have several volunteer wardens who help me each year. And this joint effort means we have over thirty years of invaluable data for the seabirds breeding along the coast of the Castlemartin Peninsula.

What does all the counting tell us?

Well, the numbers of razorbills and guillemots are increasing, perhaps bouncing back after reductions around the time of the Second World War.

Gulls and especially kittiwakes have declined. In 1985 there were nearly 700 nesting pairs and now perhaps only three or four kittiwake pairs. There has been a general decline in this oceanic gull around Britain and this is probably due to availability of their main food source which are sand eels. One idea is that the eels are now living lower down in the water due to warmer sea temperatures, which makes it hard for surface feeders to reach them.

The information from our monitoring also helps us understand how the birds are effected by disasters, like the oil tanker Sea Empress which went aground 21 years ago. Armed with long term data and evidence we can work to protect our wildlife in Wales now, and in the future. 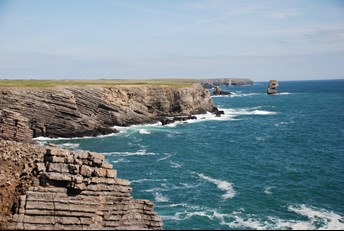 Come and visit now and take a walk out to Stackpole Head where you get excellent views of the birds, and so much more! All the information you need is on our website.

Stackpole National Nature Reserve, near Pembroke Places to visit Things to do